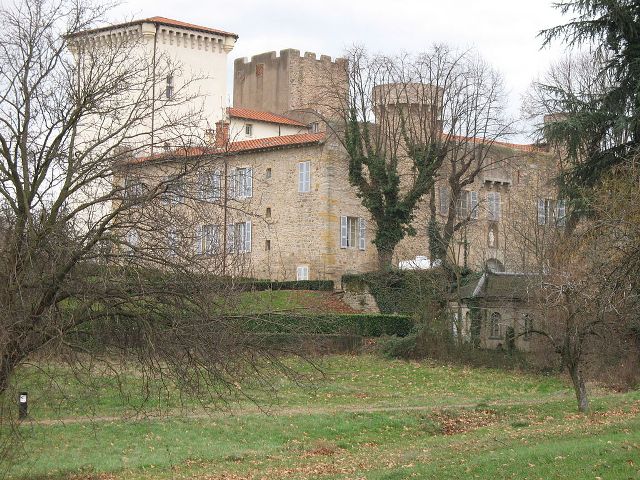 Location: Charly, in the Rhône departement of France (Rhone-Alpes Region).
Built: 13th century.
Condition: In good condition.
Ownership / Access: Private property.
Notes: Château de Charly is an ancient castle, the thirteenth century, rebuilt in the eighteenth century and mutilated in the nineteenth century, which stands in the municipality of Charly in the city of Lyon in region Auvergne-Rhône-Alpes. The castle is the subject of a registration as historical monuments by order of 7 June 1926. The castle of Charly is located in the city of Lyon in the municipality of Charly to the south. The original construction dates from the early fourteenth century. In the sixteenth century, we find the following description: "chasteau moated four laps, pontz, dovecote, press, ESTABLES, barns, garden, vergier, pond, meadow, vineyards, arable land." Two square keep, a crenellated, the other crowned with battlements and provided pellet of pepper on angles are connected by a rectangular main building. The set is preceded by a wall flanked on its northern facade two round corner towers with battlements that frame topped by entée door of a gatehouse. There were two round towers, which protected a drawbridge and moat, now filled. The castle is privately owned and not open to visitors.