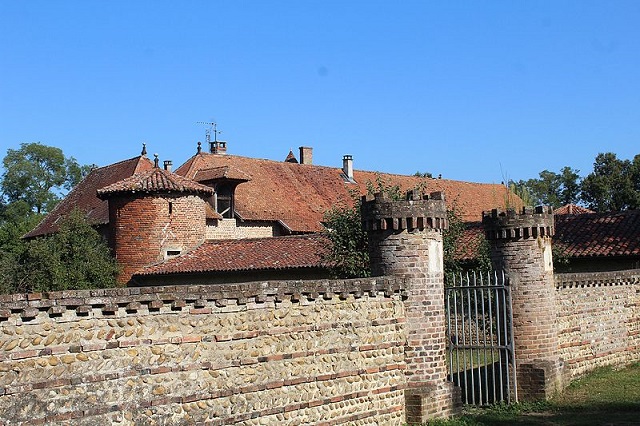 Location: Chanoz-Châtenay, in the Ain departement of France (Rhone-Alpes Region).
Built: 11th century.
Condition: --.
Ownership / Access: Private property.
Notes: The castle of Châtenay is an old fortified house dating from the eleventh century rebuilt in the fifteenth century and rebuilt in the nineteenth century, center of the seigniory of Châtenay which stands on the commune of Chanoz-Châtenay in the department of Ain in Auvergne- Rhone Alps. The castle is partially registered as a historic monument by decree of 18 February 19871. Only the facades and roofs of the buildings which surround the inner courtyard to the east with the two corner towers, Fifteenth century attached to the main building in the east and the retaining wall to the northwest are inscribed.The lordship with a fortified castle, in all justice, is the possession at the origin of the lords of the name and arms of Châtenay. In 1274 Hugon de Châtenay acknowledges holding his stronghold of the Count of Savoy. In 1306 Pierre de Châtenay, knight, receives from Count Amedee V of Savoy confirmation of the average and low justice. The land of Châtenay passed from this old family to that of Bouvens, which in 1448 sold it to Sibued de Feillens. In 1516 Amé de Feillens allied him to James I of Monspey, knight. In 1573 James II of Monspey bought high justice from the Count of Pont-de-Veyle and Chatillon. The Duke of Savoy erects some time after the earth in barony, which Louise de Monspey, the only daughter of James II., Bears a dowry to Pierre de Seyturier, lord of La Verjonniere. From the Seyturier, the barony of Châtenay passes to the Garron family, from which it did not go out, following the acquisition of it on April 9, 1649, Jean Garron, adviser of the king.