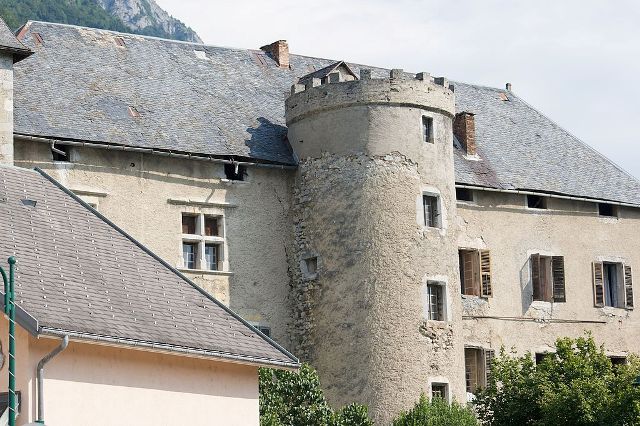 Location: Mercury, in the Savoie departement of France (Rhone-Alpes Region).
Built: 14th century.
Condition: In good condition.
Ownership / Access: --
ISMH Reference Number: PA00118274
Notes: Château de Chevron is an ancient castle of the eleventh century, rebuilt several times, especially in the sixteenth century and the eighteenth and nineteenth centuries, center of the Lordship of Châtillon, which stands on the town of Chindrieux in the Savoie region Auvergne-Rhône-Alpes. The castle is the subject of a partial registration under the Historic Monuments by order of 29 April 1991. Only the polygonal tower, the large square tower and gatehouse are enrolled. The castle is mainly built of tufa and limestone. Pregnant Wedding eminence on which stands the castle, built in the thirteenth century and restored in 1307 by order of the Count of Savoy, encloses a dwelling in part of the fifteenth century, Louis de Seyssel, abbot of Vendome, reworked and enlarged in 1537, and flanked, lake shore, an old tower dating but remains difficult. The castle has several entries. To the right of the main entrance at the northwest corner stands an octagonal tower made of tuff. The interior thereof is circular. Its exterior cladding, made great tuff slabs of 3.50 m wide is after the device implemented for the interior wall. It is estimated that the ground floor vaulted domed dated fifteenth century. It could be an originally round tower and which was transformed into polygonal tower. The floors are served by a side staircase to it. The castle has undergone many changes over the centuries. In addition to work due to the initiative of Louis de Seyssel, other changes took place during the eighteenth and nineteenth centuries. A statue of the poet and politician Lamartine, was located near the castle in 1925 by François Boreau then owner. This is a work of sculptor Chambéry March Valett. The statue was transported by boat from Chambery using the Leysse and Lake Bourget.