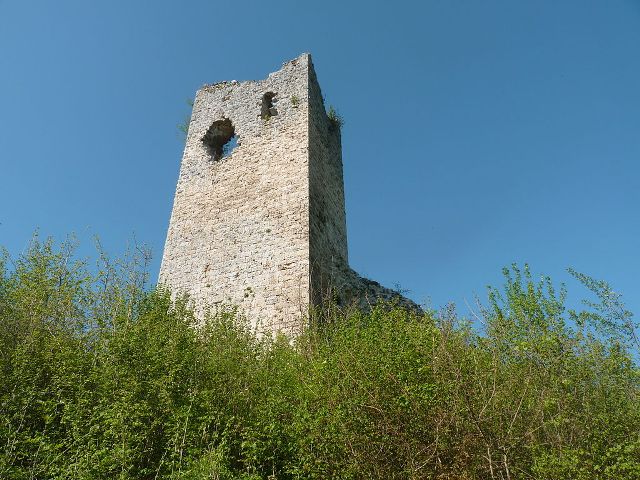 Location: Chirens, in the Isère departement of France (Rhone-Alpes Region).
Built: 11th century.
Condition: Ruined.
Ownership / Access: Privately owned.
ISMH Reference Number: PA00117135
Notes: Château de Clermont is an ancient land of the eleventh century castle, rebuilt in the thirteenth century and dismantled in the seventeenth century, the ruins stand in the town of Chirens in the Isère department in the Rhône-Alpes region. It was the capital of the commandment of Chirens and the center of the Lordship of Clermont in Vienna. The ruins of the tower and the remaining vestiges of the old castle and its two speakers are the subject of a classification as historical monuments by order of 18 October 1983.The site is presented as a triple concentric chamber controlled by an irregular pentagonal keep on mound, protected by a curtain paired flanked by a round tower. The dungeon, 4 storeys high on the ground floor that separates the floor of the thirteenth century, built in stone and tuff, is blind, except for an opening on the third floor south side probably corresponding to the latrine; at this level remains north side traces of a large fire. The twenty-first century, the ruins that remain can be attributed to the oldest parts in the twelfth century.