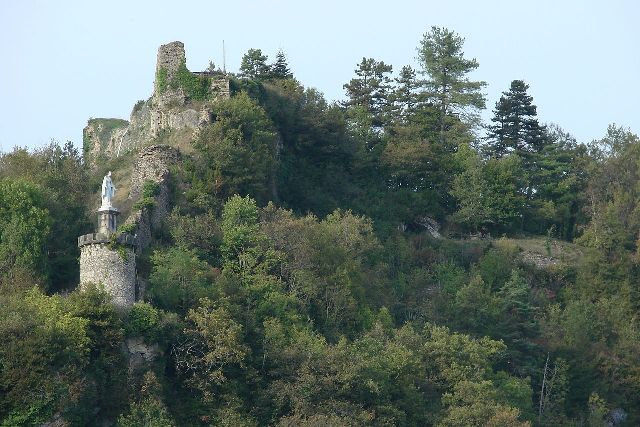 Location: Saint-Rambert-en-Bugey, in the Ain departement of France (Rhone-Alpes Region).
Built: 12th century.
Condition: Ruins.
Ownership / Access: Owned by the municipality.
Notes: Château de Cornillon is an ancient castle of the twelfth century whose ruins stand in the municipality of Saint-Rambert-en-Bugey in the department of Ain, in region Auvergne-Rhône-Alpes.The castle looks back to the beginning of the eleventh century. Built to be a supervisory position, this castle was pretty basic and sparsely inhabited. At an unspecified time, the Abbey of Saint-Rambert builds in place a watchtower for monitoring road Albarine, privileged place of passage of invasions. It was called "Cornillon", derived from the Latin name for a promontory projecting. November 30, 1196 by a treaty of pariage, the abbey can not only ensure the protection of his possessions against the neighboring lordships of Coligny and Thoire-Villars, Abbe Regnier chose to place themselves under the protection of powerful Count of Savoy and Maurienne, Thomas 1, provided that the castle which is assigned to perpetuity count would never alienated the county, nor given as a dowry to any girl; over the count should place a garrison and maintain them. Cornillon Castle, rebuilt in stone and equipped with fortifications, became Savoyard with Saint-Rambert.In 1252, Count of Savoy, Pierre gives the prerogative to his brother William, which, notwithstanding the terms of the deed of assignment to his family, bequeathed by his will dated May 6, 1258, to Beatrice of Savoy, daughter Peter II of Savoy, wife of the Dauphin of Vienna. After the death of Beatrice, he returned to the Count's estate, which he was no longer separated. Around 1304, the castle of Cornillon is the last bastion Savoy on the road to Pont-d'Ain. This strategic position will increase its importance and that of the town of Saint-Rambert who surrounds himself with ramparts and became a garrison town gathering place before the start of the "overlapping" helping hands for ravage the land, burn the crops, destroy the mills of the enemy; and also a low of withdrawal and storage of military equipment. It is especially by acts of war against his neighbor dauphinois, the castle of Saint-Germain, which became famous castle Cornillon. Thus, around 1310, his squire, Arthaud Montfaucon send men watch and burn down the castle and the village of Saint-Germain. In 1321, it is by Saint-Rambert, and with men and means provided by the squire of Cornillon, the seat is set before the castle of Saint-Germain, by troops of the Count of Savoy. The Dauphiné-Savoie war ended around 1355 and following the Treaty of Paris, the castle of Cornillon loses its strategic interest. Accordingly, it was more or less maintained the fifteenth and sixteenth centuries.In 1601, the Treaty of Lyon ended the Franco-Savoyard War and marks the annexation of Bresse, Bugey, the Gex and Valromey by France. To avoid any hint of revenge, Marshal Biron dismantles Cornillon like the castle of Saint-Germain. Today, the ruins of Cornillon Castle are redeveloped by the "Association of Friends of the Canton of Saint-Rambert." The default benefited Castle excavation of a survey campaign.The twenty-first century there remains the horn bud castle, a tower "restored" and a waist-high statue, and atop a tower and the ruins of various buildings. In the early twentieth century, the castle was still fairly clear and bordered by vineyards.

How To Get To Château de Cornillon (Map):