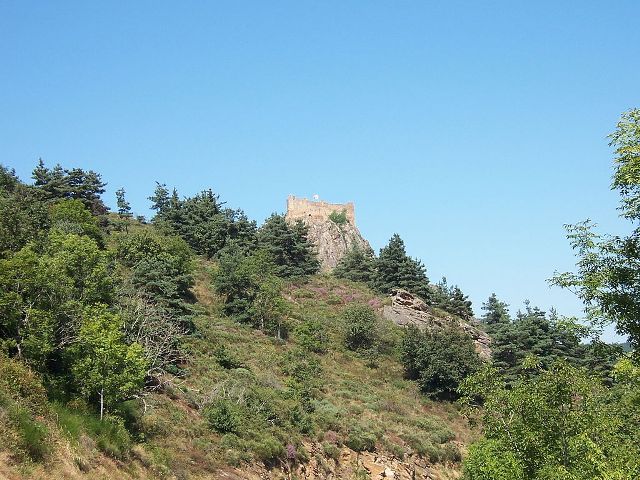 Location: Sail-sous-Couzan, in the Loire departement of France (Rhone-Alpes Region).
Built: 11th-14th century.
Condition: In good condition.
Ownership / Access: Owned by a private company.
ISMH Reference Number: PA00117572
Notes: Château de Couzan is a fortress built on a rocky outcrop west of Sail-sous-Couzan (Loire) in the mountains of Drill above the Lignon du Forez. The lordship of Couzan was the largest of Drill.Eleventh Century: family Semur (Damascus) built the first post of defense. fifteenth century: the family of Levis takes the fortress, following the marriage in 1425 of Eustache de Levis with Alix de Couzan, daughter of Hugues VI, Baron de Damas-Couzan, said "Hugues VI of Damascus." seventeenth century the castle was acquired by the family of Luzy in 1622. The latter takes the marquis name Couzan and first Baron of Drill. This branch of Luzy is extinguished at the end of the eighteenth century. The castle was taken over by Martha Luzy-Couzan, Balthazar girl Luzy-Couzan, who married Antoine François de Thy de Milly. The castle remained in the family of the Counts of Thy Milly until 1932. 1932: acquisition by DIANA, which undertakes major restoration work, the castle having remained uninhabited since the Revolution.The site consists of the area around the castle was registered historic monument August 22, 1947 while the remains of the castle were classified since December 20, 1890.

How To Get To Château de Couzan (Map):