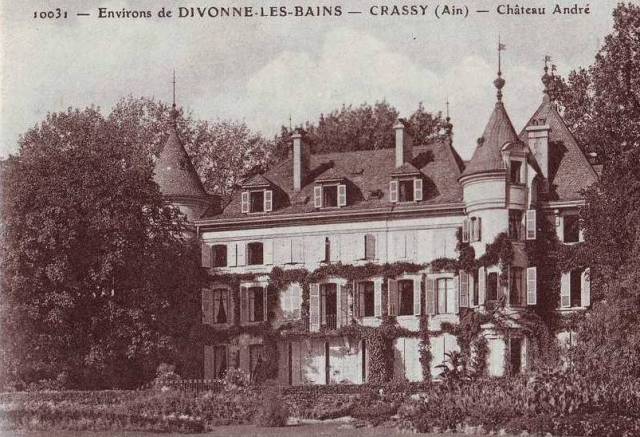 Location: Divonne-les-Bains, in the Ain departement of France (Rhone-Alpes Region).
Built: 19th century.
Condition: In good condition.
Ownership / Access: Privately owned.
Notes: Château de Crassy is a castle located in the town of Divonne-les-Bains (hamlet Vésenex-Crassy) in the department of Ain and the region Auvergne-Rhône-Alpes in France.The castle was built in the heart of an area of 63 hectares, crossed by Boiron that flows into Lake Geneva to Nyon (Switzerland), including forty agricultural parcels by the family De Prez. Originating in the canton of Fribourg in Switzerland, the Prez settled in the Pays de Gex in the early seventeenth century. It's December 9, 1630 Urbain Prez became lord of Crassier (Swiss town today canton of Vaud) where his descendants remained until 1874. It was in this castle that was born in 1733 General Jean Etienne Philibert de Prez Crassier. The estate was sold in 1874 by Baron Edouard de Prez-Crassy Alfred André, a banker in Paris and member of the National Assembly.This family property is built on three levels. Its 1875 m2 and contain 21 master pieces, round corners rooms in two towers, a library, not to mention a winter garden conservatory, greenhouses, an orangery, a pond, a farm and its outbuildings.

How To Get To Château de Crassy (Map):