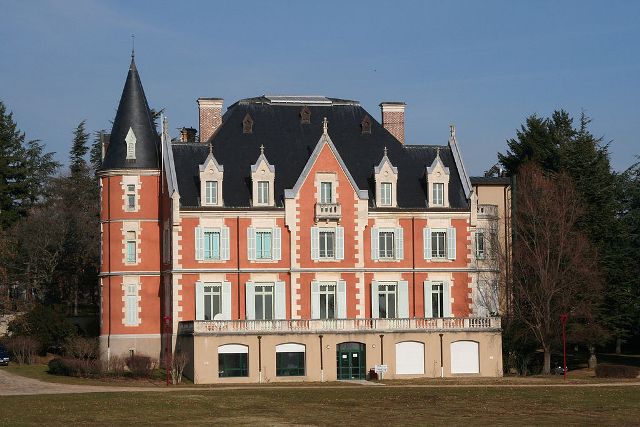 Location: Annonay, in the Ardèche departement of France (Rhone-Alpes Region).
Built: 18th century.
Condition: In good condition.
Ownership / Access: Owned by City of Annonay.
Notes: Château de Déomas is a castle located in the town of Annonay in the Ardeche department in France. The name of the castle comes from the Deûme river, called by Déôme places, which flows nearby. It was built in 1876, north of Annonay, Paul Seguin. When he died, leaving no heir, the property was sold in 1897 to Claire-Cyprien Fabre (1872-1967), a large family Marseille, and wife of George Vignat annuitant in Annonay. Their third child, Christiane, born in 1906, married in 1937 Jacques Rueff, Deputy Governor of the Bank of France in Paris and French academician. In 1971, Jacques Rueff wanted to sell the property to the city, the mayor of Annonay then being Henri Faure. The deed of sale was over 7 March 1979 by the municipality of Jean Parizet successor to that of Henri Faure. Jacques Rueff had died the previous year. This acquisition resulted in Annonay to enrich its heritage. After restoration following an accidental fire in the early 1990s, this castle is the central decorative element of the eponymous park. The castle, in classical style, is an illustration of the architecture of Annonay of the late nineteenth century. The interior consists of a mixture of classic and modern architecture. It has, on four floors of 250 m2, inlaid different rooms. The ground-garden has six essentially devoted to multimedia rooms. The ground floor and first floor, one can see five other rooms. Finally, the second floor has three.