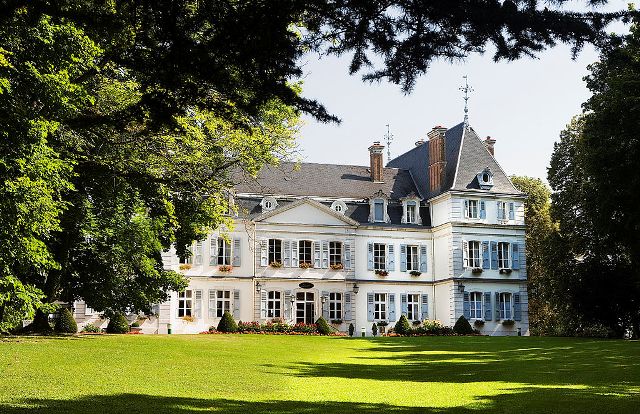 Location: Divonne-les-Bains, in the Ain departement of France (Rhone-Alpes Region).
Built: 18th century.
Condition: In good condition.
Ownership / Access: Privately owned.
Notes: Château de Divonne is a castle of the eighteenth and nineteenth centuries in the commune of Divonne-les-Bains, in the department of Ain and the Rhône-Alpes-Auvergne region. It succeeded an ancient castle of the Middle Ages which was destroyed in 1590.The castle is mentioned for the first time in texts in 1131 under the term castrum. The Château de Divonne is now a hotel-restaurant four stars still operated by the company Great French Stages.The medieval castle, heavily fortified, was surrounded by a wall supported several round towers. In the eighteenth century a new castle, built by Claude-Antoine de La Forest, Count de Divonne, replaced the old buildings which almost completely disappeared in the nineteenth century. The new building was completed by its two square wings 18602. In the park an old postern can be seen dating from the twelfth century, unique vestige of the original castle. The Divonne Castle Park enrolled in pre-inventory of remarkable gardens.

How To Get To Château de Divonne (Map):