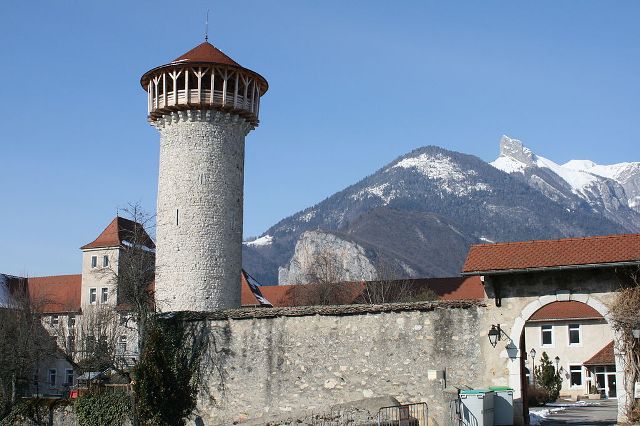 Location: Faverges, in the Haute-Savoie departement of France (Rhone-Alpes Region).
Built: 13th century.
Condition: In good condition.
Ownership / Access: Owned by the municipality.
ISMH Reference Number: PA00118478
Notes: Château de Faverges is an ancient castle of the thirteenth century, rebuilt in the fifteenth century, situated on the border of the county of Savoy and the county of Geneva, which stands in the municipality of Faverges in Haute-Savoie department in region Auvergne-Rhône-Alpes. The castle is the subject of a partial registration under the Historic Monuments by order of 19 November 1991.1 Only registered the dungeon, the floor of the court, retaining walls in the South and Southwest. Castle Faverges consists of the tower-dungeon and various other buildings. The high turn-keep of 32 meters is very representative of castle architecture of the thirteenth century in Savoy. The foundations date back to the twelfth century and were revised in 1250. In 2006-2007, she underwent a full refurbishment of the walls, installing a new internal staircase of 144 steps and the construction of a hoarding; wooden viewing gallery allowing a 360 ° view. Under the hoarding, natural nests of kestrels have been preserved and nesting boxes for swifts have been placed.