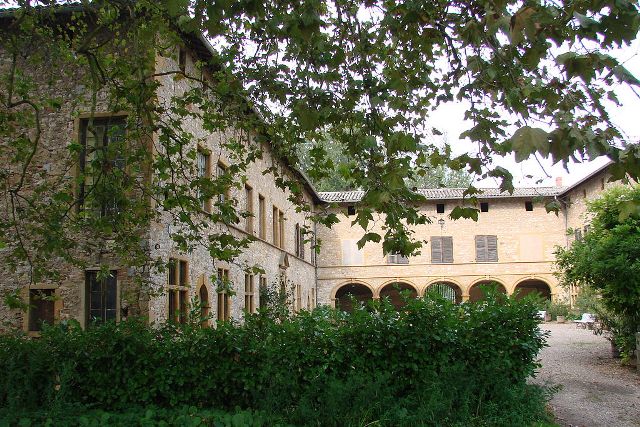 Location: Trévoux, in the Ain departement of France (Rhone-Alpes Region).
Built: 17th century.
Condition: In good condition.
Ownership / Access: Privately owned.
ISMH Reference Number: PA00116583
Notes: Château de Fétan is a former stronghold of the sixteenth century, rebuilt in the seventeenth century, which stands on the town of Trévoux in the department of Ain and the Rhône-Alpes-Auvergne region. The castle is the subject of a partial registration under the Historic Monuments by order of 30 January 1973.In 1580, the land was acquired by Fétan Jean Thévenon, Lord of Tavernost, lieutenant general of the Bailiwick Dombes, the lord of the Raffinière, Gaspard and Benoît Dufour, Jean Bluison and Bodillet brothers. At that time a fortified house already existed Fétan. August 30, 1585, Jean Thévenon sold it to Antoine Jacquet, postmaster at Lyon, to whom she was ennobled and erected a fief in 1601 by Henri de Bourbon-Montpensier, ruler of Dombes, the responsibility of the tribute and a pair of gilt spurs each vassal of mutation.Gaspard Jacquet, son of John, the alienated, January 27, 1644, André Bouilloud, master of requests to the parliament of Dombes, the heirs which she was awarded in 1659 to Pierre Perrachon, acting on behalf of Caesar Beraud, the king's counselor, recipient and payer rents the Hotel de Ville de Lyon. This fief later passed by marriage to Marguerite Beraud, daughter of Caesar, the Thélis family Valorge. Daisy Thélis his daughter married Louis Letouf, Marquis de Pradines, who gave the enumeration Fétan in 1732 and 1744. This land came at last to the Trollier, who took over the fief in 1777 and still owned in 1789. The current Fétan Castle was built in 1622. This date is engraved below the cantilever of a watchtower.