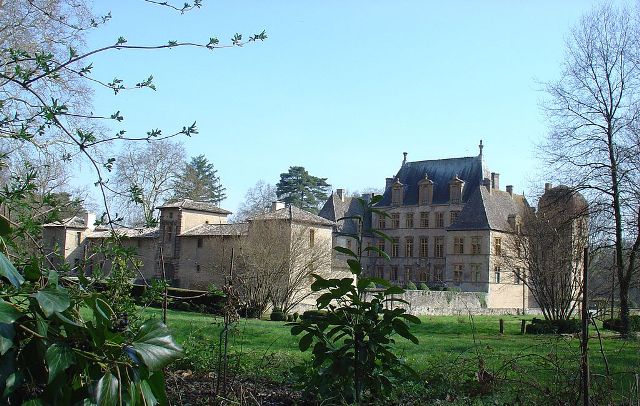 Location: Fareins, in the Ain departement of France (Rhone-Alpes Region).
Built: 1610-1616.
Condition: In good condition.
Ownership / Access: Privately owned.
ISMH Reference Number: PA00116393
Notes: Château de Fléchères is a castle of the seventeenth century, the center of the lordship and barony of Fléchères, which stands in the Dombes in the town of Fareins in the department of Ain and the Rhône-Alpes-Auvergne region, 6 km northeast of Villefranche-sur-Saône. It follows a former stronghold of the twelfth century. The castle is the subject of a classification as historical monuments by decree of 11 July 1985. The farm and the park are the subject of a registration as historical monuments by order of 28 August 2001. In June 1972, the castle becomes the property of mobsters Gang des Lyonnais, Johanny Chavel. It embarks on major restoration and development. During the summer of 1972, he organized a great opening night of his domain, with a sound and light show told a large Parisian company pyrotechnics. This festival brings to the castle a hundred thugs and as many policemen. Chavel plans to make its area a cultural crossroads with exhibitions, conferences and also the rent for banquets, weddings.

How To Get To Château de Fléchères (Map):