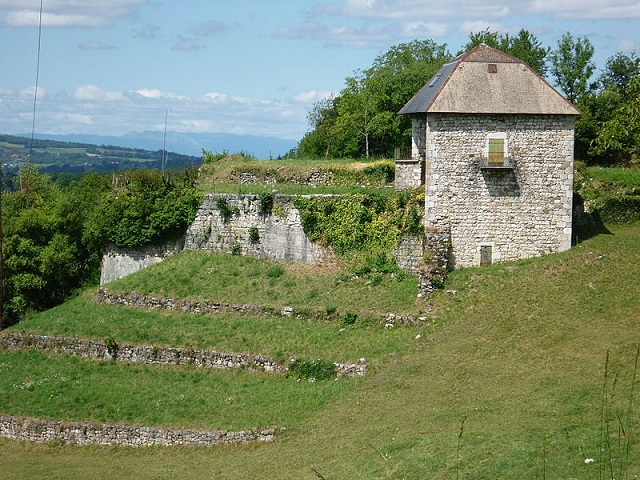 Location: Gruffy, in the Ain departement of France (Rhone-Alpes Region).
Built: --.
Condition: Ruined.
Ownership / Access: Lords of Clermont.
Notes: The castle of Gruffy is an old castle comtal, of which there remain only a few vestiges, which stood on the town of Gruffy in the department of Haute-Savoie, in Auvergne-Rhone-Alps.The first mentions of a lord of Gruffy go back to the end of the thirteenth century. Bishop Robert of Geneva is named Lord of Rumilly in Albanian and Gruffy in a cate of April 1, 1280, and a member of the family of Conzie pays homage to him for possessions in the seigniory in 1278, then de Villette in 1279. In 1316, William III of Geneva pays tribute to the Dauphin John II of Viennois for his county and in particular his land of Gruffy. On the 5th of January 1326, the Count of Geneva Amedeo infested the castle at Jean Métral, known as de Desingy, an act possessed by the departmental archives of Haute-Savoie. Mathilde d'Auvergne, also known as "de Boulogne", wife of Count Amedee III of Geneva, kept her dowry on her husband's death, as well as the châtellenie and château de Gruffy, added in 1367. The castle is one of the last to enter the domain of the house of Savoy, following the acquisition of the county of Geneva in 1401. Indeed, it is part of the inheritance of Blanche, daughter of Count Amédée III of Geneva who kept him until 1413. The latter married Hugh II of Chalon-Arlay, vicomte of Besancon (1362-1392), vicar imperial (1364-1392), in 1363. In 1419, the Duke of Savoy Amedee VIII subordinated the seigniory to Jehan / Jean de Compey. He remained in the family until 1522. This possession is the source of the younger branch of the Compey-Gruffy. A few years later, in 1563, he entered the bosom of the Menthon family, which guarded him until the invasion of the Duchy of Savoy by the French revolutionary troops in 1792.