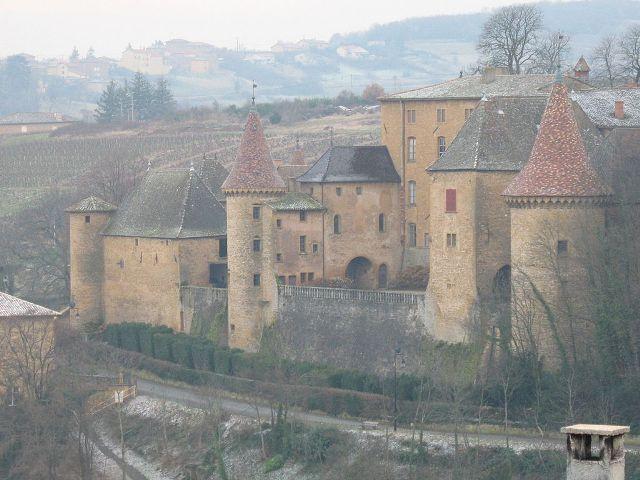 Location: Jarnioux, in the Rhône departement of France (Rhone-Alpes Region).
Built: 13th century.
Condition: In good condition.
Ownership / Access: Privately owned.
ISMH Reference Number: PA00117770
Notes: Château de Jarnioux is a former castle, founded in the late thirteenth century or early fourteenth century, overhauled from the fifteenth to seventeenth century, which stands on the town of Jarnioux in the Rhône department in Auvergne region-Rhône -Alps. The castle is the subject of a partial registration as a historic monument by decree of 16 May 1966. Only all the facades and roofs are enrolled.The castle looks like a pentagonal enclosure that order, standing on the side of the attack, a large cylindrical tower. Other angles are provided with round towers. Before this set, Barbican square, framed by two flankers circular, closed by a gate tower commanding a drawbridge. The chapel built over the main entrance gave him his symbolic protection. The castle consists of buildings of different styles, witnesses alterations made over the centuries. The original construction, golden stone Beaujolais, the date of the thirteenth century. Six towers, the tower that reaches 30 meters in height, were added later. A wing Renaissance is attributed to Philibert Delorme. The monumental entrance included a drawbridge, now replaced by a masonry bridge but there remain visible traces. Above the door, one discovers the arms of the Henry family.