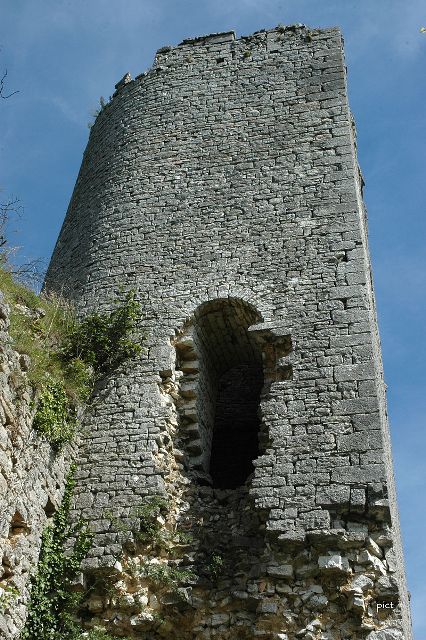 Location: Jasseron, in the Ain departement of France (Rhone-Alpes Region).
Built: 13th century.
Condition: Ruins.
Ownership / Access: Privately owned.
ISMH Reference Number: PA00116414
Notes: Château de Jasseron is an ancient castle of the tenth century, rebuilt in the thirteenth century and ruined in the late sixteenth century, the center of the Lordship of Jasseron, the ruins stand in the town of Jasseron in the department of Ain region Auvergne-Rhône-Alpes.The remains of the castle are the subject of a registration as a historic monument by decree of February 22, 1927.Around 980-990, Richier de Coligny, the son of Manasses de Coligny, traveling monk in the Abbey of Saint-Claude, donated to the monastery of his castle in Jasseron and all its dependencies. The abbots of Saint-Claude kept it, united in their manse, even in the early years of the thirteenth century. Around 1212, Father Bernard III of the Thoire committed to Stephen II, sire of Thoire-Villars, his nephew, who only possessed the few years since it was already enfeoffed in 1231 to Ame de Coligny, lord of 'Andelot, who was probably rebuilt around 1230. At the same time it is based in the backyard a priory and chapel which was leveled in the nineteenth century. This foundation intervened following an agreement between the Sire de Coligny and the abbey of Saint-Claude.