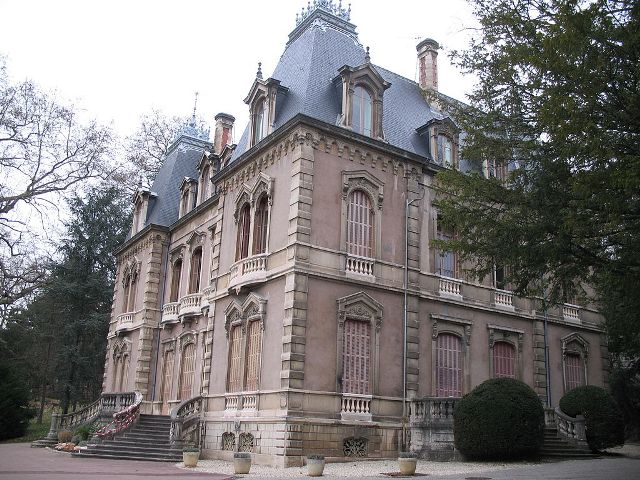 Location: Sainte-Foy-lès-Lyon, in the Rhône departement of France (Rhone-Alpes Region).
Built: 19th century.
Condition: In good condition.
Ownership / Access: Private property.
Notes: The Château de la Bachasse is located on a hillside, facing the Yzeron, in the municipality of Sainte-Foy-lès-Lyon in the Rhone. Its name recalls the existence of a pool (or Bachasse) dug in the courtyard of the farm. He was on the field a mansion whose ruins were demolished in 1965. The present castle was built between 1880 and 1890, consists of a rectangular main building flanked by its four corners of square pavilions. It comprises a ground floor, a floor and an attic floor dormers. The slate roof of the main body is gambrel, those pavilions are steep. The berries are topped by lintels or triangular. The walls angles are highlighted by chains boss. The architects were Turbet and Alexis Tissot (1847-1926). The south facade is preceded by an elegant staircase balustrade including a double staircase of eleven steps. The park, partly wooded, covers 8.2 hectares. The castle is available on Bachasse railwaymen and their families. It can also be booked for various events.