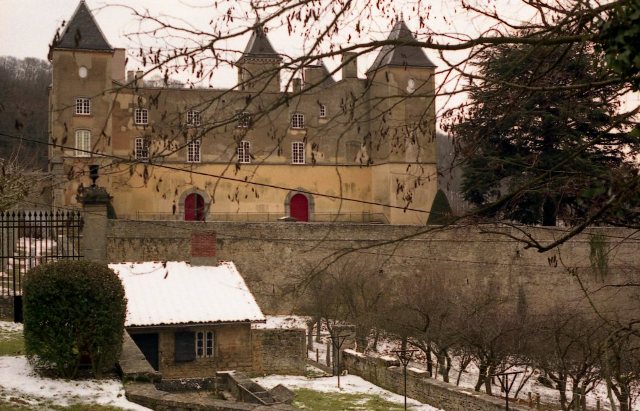 Location: Limonest, in the Rhône departement of France (Rhone-Alpes Region).
Built: 14th-17th century.
Condition: In good condition.
Ownership / Access: Privately owned.
ISMH Reference Number: PA00117779
Notes: Château de la Barollière is an ancient castle, fourteenth century (?), Rebuilt in the seventeenth century stands in the municipality of Limonest in the city of Lyon in region Auvergne-Rhône-Alpes. The castle is the subject of a registration as a historic monument by decree of June 7, 1926.The castle was built by the family Villiers in the fourteenth century. The arms of the Richard family of Azure a chevron between three silver crescents on the kitchen fireplace mantel attest their presence. Around 1760, there Maritz did make significant changes. It is in 1810 that the Baboin family, whose current owners are descendants, bought the castle. Baboin the family is an old family of the Lyon region, who owned very large silk factories between the seventeenth and twentieth centuries. They also possessed business in the middle of the bank, first ancillary basis under the old regime, but especially during the emigration of two brothers Romain and Benjamin Baboin, Austria during the French Revolution. From the first Restoration, Roman Baboin was ennobled by letters patent of June 20, 1814 by Louis XVIII and bore the title of Baron of Barollière. The sovereign was well remembered the great services rendered during migration by the banker Romain Baboin. He was also decorated with the Lys d'Argent, and made Receiver General of Finance. His son Joseph Romain having no children, the castle will be transmitted to the offspring of Roman Baboin of Barollière by his eldest daughter Sophia.the Barollière of the castle consists of a rectangular main building flanked by four square towers topped with pavilion roofs and a fifth tower is located in a corner of the courtyard. Work is carried out in the seventeenth century, the arches of the courtyard and its well located in the center and the entrance gate decorated with lions' heads bosses. Windows, balconies and wrought iron railings marked with an "M", named Maritz, owner, date from around 1760. The state rooms were renovated between 1770 and 1780, and adorned of varied scenery, trompe l'oeil, plasterwork, paneling.

How To Get To Château de la Barollière (Map):