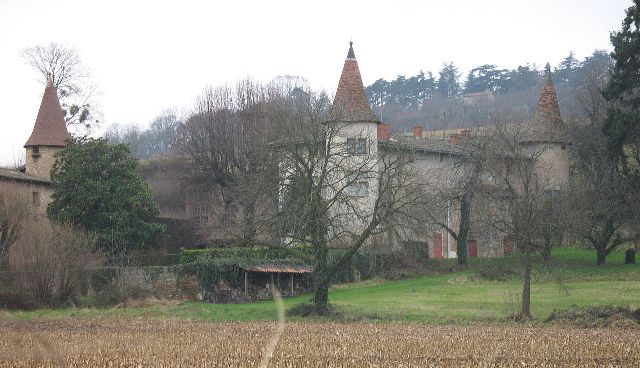 Location: Anse, in the Rhône departement of France (Rhone-Alpes Region).
Built: 16th-17th century.
Condition: In good condition.
Ownership / Access: Private property.
ISMH Reference Number: PA00117710
Notes: Château de la Fontaine is located in the commune of Anse in the Rhône department, on a hillside, facing the Saone and the edge of the National. The castle is the subject of a classification as historical monuments since 1912. .The fief of Fontaine belonged to several families, and are attested several lords, Jean Covet in 1570, Bessie Lawrence in the first half of the seventeenth century whose only daughter Elizabeth (- 1669), lady of the Fountain, wife Alexandre Bottu (- 1650), Lord of the Barmondière and Montchervet, advise the king's secretary, lawyer of Madame the Bailiwick of Dombes. Their son Lawrence Bottu of Barmondière 'adviser secretary wife Marguerite Fiot king in 1654, and their only son François, Esquire, wife Anne Marie Hesseler and succeeded his father in 1692. He was succeeded his son Francis, Esquire, married to Charlotte Champs and their only son Louis François, esquire, married to Sabot bridesmaid Piseys. Their daughter and heiress Teresa (- 1842), is Canoness chapter of Joursey in Drill. In 1842, she bequeathed the castle of the Fountain in the mense archbishop of Lyon. A work of the painter Utrillo from 1931 is the "Château de la Fontaine" The area is now private property and not open to public.

How To Get To Château de la Fontaine (Map):