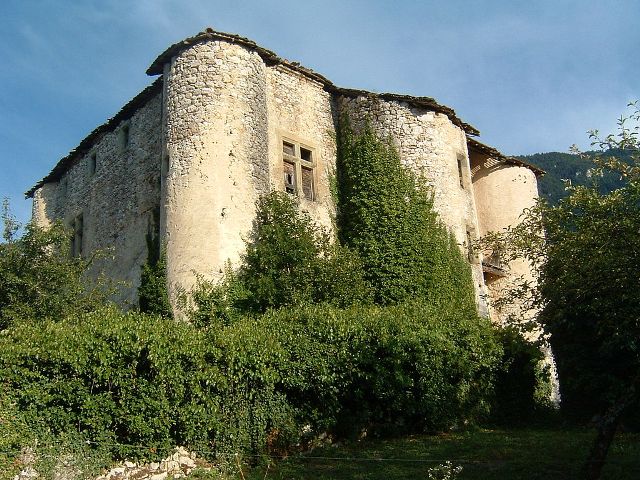 Location: Saint-Jean-de-Chevelu, in the Savoie departement of France (Rhone-Alpes Region).
Built: 14th century.
Condition: In good condition.
Ownership / Access: Million Rousseau.
Notes: Château de la Forest, also known as la Grande Forest and la Grande-Forêt, is a stronghold of the fourteenth century, the center of the lordship of La Forest, who stands in the municipality of Saint-Jean-de-Chevelu in the department Savoie region of Auvergne-Rhône-Alpes. The castle is the subject of a registration as historical monuments by order of 3 June 1995. Sis four kilometers from the small town of Yenne, the castle is very representative of the military architecture in the late thirteenth and early fourteenth century. Raised on a terrace built in major appliance, it is a quadrangular enclosure flanked by four corner towers, leveled now up to the main building. close accessed inside by door, arch, protected by a fifth tower erected in the center of the west facade, forming with corner tower a "gatehouse". The door was preceded by a portcullis, which you can still see the remains and a hoarding, wooden gallery once attached at the slots to beat the walls in case of siege, thrown from one tower to the other on this side. A balcony was built in the last century, in its place. The castle consists of a ground floor, or bottom, and a floor. A chapel built outside, leaning against the southeast wall, serves as a stable today. The five towers, découronnées the Revolution on the order of the representative of the Convention in Savoy, were once pepperpot with battlements, protected front building with weep holes, or bunkers, constituting an enclosure. The castle lights, among others, by several mullioned windows. Above one of them are carved the arms of the family La Forest. In short, by a path, you reach the "Little Forest or Little Forest", consisting of a square tower, placed on a mound, and of which only the foundations. Next to the tower, a few sections of wall and two ruined barns whose bases include gothic elements, including doors. They come very probably the original castle, almost entirely disappeared. The dungeon still has a mullion window.