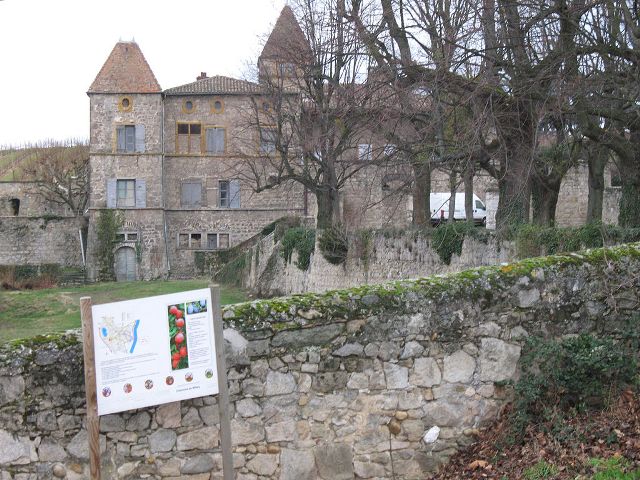 Location: Millery, in the Rhône departement of France (Rhone-Alpes Region).
Built: 15th century.
Condition: In good condition.
Ownership / Access: Privately owned.
ISMH Reference Number: PA00117996
Notes: Château de La Gallée is a former mansion of the fifteenth century, rebuilt in the seventeenth century and restored, which stands in the municipality of Millery in the Rhône department in Auvergne region Rhône-Alpes. The castle is the subject of a registration as a historic monument by decree of June 7, 1926.In the thirteenth century the area was occupied by the Gali or family Gall, who probably left his name. Rougier family, family Lyon magistrates, is the sixteenth century landowner. In the early seventeenth century, John, secretary of the city of Lyon, wife Marie Rougier, heir to the Gallée. In the middle of the seventeenth century, Thomas (? 1625-), son of previous, is provost of Lyons; he married Isabeau Dulieu; it is he who, in 1680, will achieve major improvement work that still exist today. Jean Camille (1650-1722), son of previous, lord of Grigny and adviser of honor at Présidial Lyon succeeds them; he married in 1691. In the early eighteenth century, Thomas (-1748) is religious. From 1747 to 1762 the property belongs to the Jesuits of the Trinity College of Lyon to their banishment from the kingdom. Their succeed the Oratory of 1762-1793. In 1793 The property is sold as national property to François Johannot, Lyon merchant. During World War II, the area belongs to Mrs. Clavière. Today, the area is a farm.Although a castle existed since the fifteenth century, all was extensively remodeled in the late seventeenth century. The main buildings, with high walls that extend the north and east, forming a square with three vertices are flanked by square pavilions topped with roofs with four sides. A belvedere tower practically stands in the center of this geometric figure. The building has a ground floor, two floors and an attic floor pierced with small œils bull's. The main entrance to the property is located east side; you reach a lime avenue lined by a gate flanked by two small square pavilions; driveway leads to a courtyard before preceded by two round towers with flat roofs; This forecourt overlooking a wall with a monumental gateway to bosses framed by columns and topped by a low pediment. The courtyard is bordered on two sides by an arcaded gallery surmounted by a covered walkway. The south facade opens to terraced gardens; jets of water were fed by underground connected to the village center. In the north, line up two long operating buildings. A long unbroken wall surrounded the property. Inside include the right stone staircase and large murals depicting mythological figures.

How To Get To Château de La Gallée (Map):