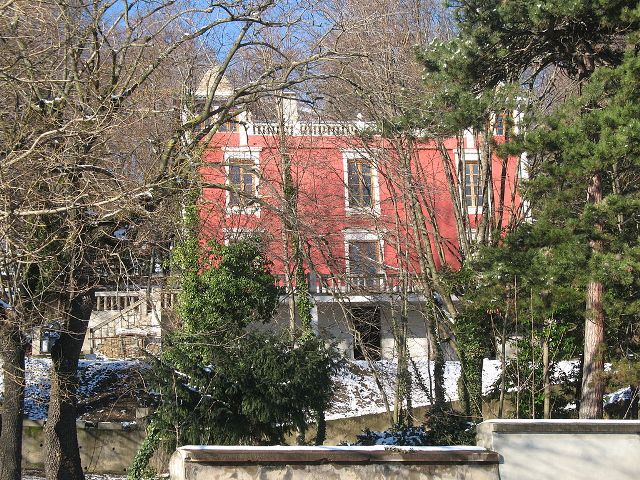 Location: Lyon, in the Rhône departement of France (Rhone-Alpes Region).
Built: 19th century.
Condition: In good condition.
Ownership / Access: Private property.
Notes: The Château de la Jayère is an old country house in the 9th arrondissement of Lyon, in the city of Lyon. On a hillside, below the district Duchère, overlooking the Saône plain and the Vaise. This "campaign" has a rectangular plan of the house whose main facade, built along three levels, is oriented to the south. The second level opens onto a terrace balustrade. The north facade is pierced by two oculus at the last level. The building was recently restored and is easily recognizable red plaster that covers it. The original roof with four sides was adorned with four small pavilions steep roof angle. In the southernmost part of the park, along the Avenue of the 25th regiment of Senegalese riflemen, stands a small square corner flag in bicolor tiles. Going up this avenue, one also discovers a timber-framed building, the former stable. Above, separated from the property by a wall, there are still a neo-medieval watchtower. The upper, covered platform is supported by corbels and equipped with loopholes. Between the tower and the house, a bridge spans a small stream. The property can not be visited.