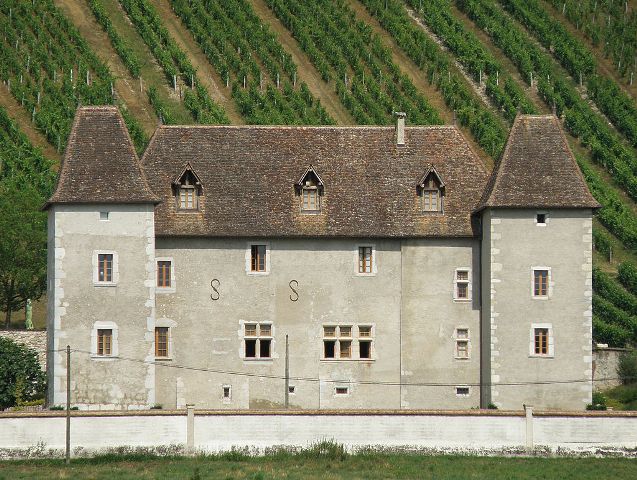 Location: Jongieux, in the Savoie departement of France (Rhone-Alpes Region).
Built: 13th century.
Condition: In good condition.
Ownership / Access: Currently offers guest rooms.
Notes: Château de La Mar or château de Cordon is a former stronghold of the thirteenth century, which belonged to Count Mareste, which will leave its name to the hill, restored in 1625, the center of the lordship of La Mar, which stands on the town Jongieux the department of Savoie, in region Auvergne-Rhône-Alpes. The fortified house in part of the thirteenth and fifteenth centuries and restored, is in the form of a main building, flanked by two square towers, and sees its front facing west to take the day by mullioned windows fifteenth century. A shield carved with the arms of La Mar, dated 1625, in the tops of the court Gateway; it was affixed during repair of the northern part performed for the wedding of Hélène de La Mar with Pierre cord. Inside, one can see a Renaissance staircase and a reception room. The Countess of Evieux and her husband who have possession at the time of the French Revolution, are confiscated the castle is declared national property. Teresa Lucia, their daughter, who married in 1766, Claude-Nicolas-Julien, Count of Montmayeur and 5th Marquess of Arvillars, sells the castle of La Mar in 1818 to General Count de Boigne; this family will retain until the 18983, when she sells the Count cord. In 1974, the fortified house is the center of a farm and winery. In 2009, Château de La Mar is dedicated solely to wine making, since 2013 and offers guest rooms.

How To Get To Château de La Mar (Map):