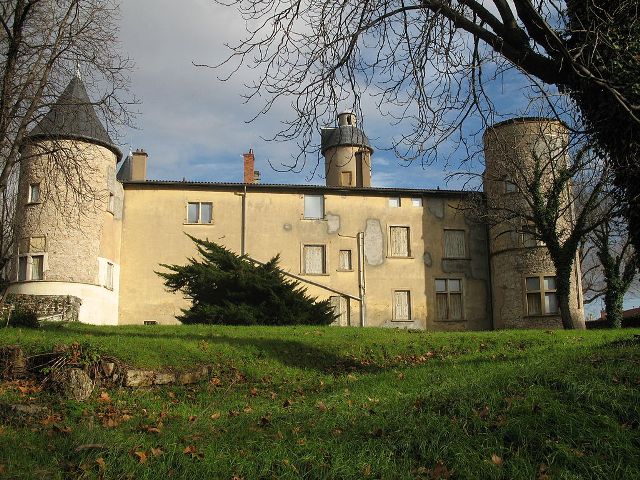 Location: Lyon, in the Rhône departement of France (Rhone-Alpes Region).
Built: 16th century.
Condition: In good condition.
Ownership / Access: State property.
ISMH Reference Number: PA00117786
Notes: Château de La Motte (or La Mothe) is located in the 7th arrondissement of Lyon, left bank, in the Rhône department. It lies near the junction of ancient roads of the east and south of Lyon, on the border between the Dauphiné and Lyonnais. It occupies a small hill (hence the name) that made him safe from flooding and provided good visibility before the urbanization of the district of Guillotière.Pending the results of archaeological excavations at the site, it is not possible to establish with certainty a prior occupation in the fifteenth century. The buildings, flanked by round towers and a square tower up an irregular quadrangle surrounding a courtyard. The entrance to the south, has preserved battlements. A keep dominates the whole. In the eighteenth century, the Western Wall was replaced by a terrace. A chapel was still visible in the nineteenth century. A plaque in memory of General Toussaint Campi (1777 - 1832) is affixed to the front of the castle. The outbuildings, probably built in the late sixteenth century, include two barns with granaries, a canopy housing a wine press and a pool and two barns. Origins until the nineteenth century, the area covers just over 17 hectares. The facades and roofs are listed on the inventory of historical monuments by order of 4 November 1983. Part of the estate is open to the public.