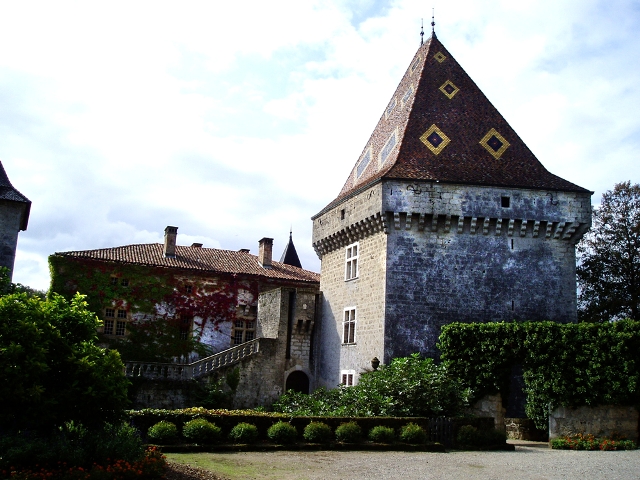 Location: Sône (La), in the Isère departement of France (Rhone-Alpes Region).
Built: 14th-19th century.
Condition: In good condition.
Ownership / Access: Privately owned.
ISMH Reference Number: PA00117290
Notes: Château de la Sône is an ancient castle of the fourteenth century, rebuilt several times that stands in the municipality of La Sône in the Isère department in Auvergne-Rhône-Alpes region. The facades and roofs of the castle and the chapel are the subject of a registration as a historic monument by decree of November 6, 1968. The park is the subject of a registration as a historic monument by decree of 30 June 1995.At the site of the castle, commanding the towpath along the river and the bridge, since Roman times the crossed there, was originally a Gallic oppidum which was followed by a strong house mentioned in 1210 in letters patent of Emperor Otto IV, confirming the rights on lands Sône Abbey Montmajour. In the first half of the fourteenth century, the building was enlarged and strengthened its defenses by Ardanchon of Reffrairie (or Reffreyrie) making tribute to Humbert dolphin, dolphin last Viennese. A century later in 1448, the Dauphin of France, Louis, later King Louis XI of France stays the Reffrairie going hunting in the forest of Claix, nearby. In the sixteenth century, the fortified house suffered heavy damage during the religious wars. Catholics and Protestants argue and the fact Lesdiguieres the seat. Early in the next century, in 1603, it passed into the hands of Félicien Boffin, General Counsel to the Parliament of Grenoble, who had also acquired, Horace Rivail of the manor of Sône. Felicien Boffin repair the outrages suffered by the building during the religious wars and brings profound changes and embellishments. The west tower was rebuilt, the main building takes its present appearance. The Boffin remain, for almost two centuries, the owners of the castle became Reffrairie of Sône.

How To Get To Château de la Sône (Map):