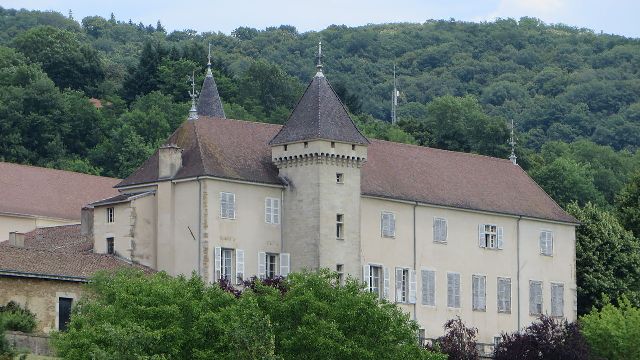 Location: Jujurieux, in the Ain departement of France (Rhone-Alpes Region).
Built: 14th century.
Condition: In good condition.
Ownership / Access: Privately owned.
ISMH Reference Number: PA00116416
Notes: Château de la Tour-des-Échelles is a former fortified tower, the fourteenth century, which stands on the town of Jujurieux in the department of Ain, in region Auvergne-Rhône-Alpes. As historical monuments; the castle and its French garden are the subject of a partial registration by order of 28 January 1949; the murals of the roof of the front porch and part of the second floor of the tower is the subject of an order by ranking from 1 March 1977.The stronghold, the capital of the lordship of the Tour des Ladders, is the thirteenth century the possession of the gentlemen of the name and arms of Ladders knight vassals Castle Poncin. It passes in 1320 in the home of Moyria, for the wedding of Aymonette Ladders, last name, with John Moyria, bringing him a dowry of home Ladders and becomes Lord of Scales and Moyria. Moyria of the lords were the lords until 1780. The feud was around 1650 in the hands of Jean-Pierre Moyria, baron of Châtillon-de-Corneille, marshal of the camps and armies of the King. The stronghold of the scales included part of the parishes of Jujurieux and Saint-Jean-le-Vieux.Inside you can admire frescoes depicting a five ancient castles view. These paintings date back to the seventeenth century were commissioned by the then owner of the five castles. Two of the restored frescoes show us the particular round of scales which one we offer within a perspective and aligned the tower of Saint-Denis and the castles of Saint-Germain and Allymes. The other two are the castles of Poncin and Pont d'Ain. A detail of the Pont d'Ain Castle allows us to date the paintings around 1624. Indeed, one notices there being a mason up the walls of the apse of the church of the village; a major flood had won that year's bedside and the church furniture including the shrine where was preserved the heart of Philibert-le-Beau.