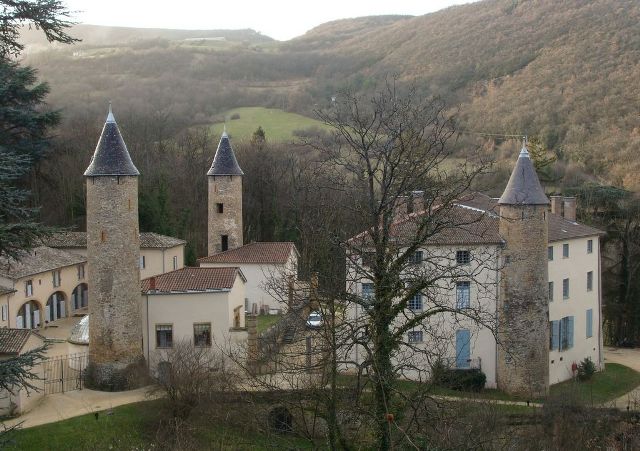 Location: Curis-au-Mont-d'Or, in the Rhône departement of France (Rhone-Alpes Region).
Built: 17th-18th century.
Condition: In good condition.
Ownership / Access: Privately owned.
ISMH Reference Number: PA00117754
Notes: Château de la Trolanderie is located in the town of Curis-au-Mont-d'Or in the city of Lyon. The field of Curis-au-Mont-d'Or or field of Trolanderie is located on the two communes of Curis-au-Mont-d'Or and Poleymieux-au-Mont-d'Or in the locality Forest.The fortified house was built in the heart of a land lordship, by the count at the end of the twelfth century. Depending on the Saint-Germain, Count, who received the homage of his vassals holding a fief, against remuneration, the freehold. G. Knight Marchamp, co-lord of Poleymieux and recognized in 1209 "hold in fee ... all his possessions in the villa of Curis from water (the birth of the Thou) to Saint-Germain." In 1213, they were transferred to G. de Collonges, canon of the chapter St. John. The castle passed in the thirteenth century at the hands of the family of Albon. This illustrious family, creator of the Dauphiné, provided many vassals abbeys Island Beard and Savigny, 23 canons of Saint-Jean and governors in Lyon. André, practicing the bank in 1265, then acquired the small fiefdom of Curis and plays, as his three son, a great role in the emancipation of the city and its meeting at United. Comes a period when the castle passed from hand to hand, because in 1642, the Albon Curis abandon in favor of new entrants to the Lyon scene, the Neufville family Villeroy, fish merchants, gravitating in the royal entourage , acceded to the nobility in the sixteenth century thanks to public office. Charles de Neufville, marrying the daughter of the governor of Lyonnais, inherits this function he transmits to his son Nicolas, who abandons his brother Camille. Camille de Neufville de Villeroy, Abbot of Ainay, bought the lordship of Curis to form his marquisate of Vimy. Soon combining political and religious power as archbishop of Lyon, Camille de Neuville resold three years later the domain of L. Veuhe, notable from a family of merchants Forez and taking his father's treasurer charge France (the size of collector), a function also performed by most lords succeeding in the castle until the Révolution.Ce collector, became provost and Count of Chevrières, remains famous in the annals Lyon for having bâtonner Lanchenu the recipient (Lord of Barollière Limonest). In 1677, his daughter sold the castle to Louis Bay, who died in 1720 in his hotel Bellecour, let one of the richest collections of the time painting (Rubens, Tintoretto ... a), inventoried by the painter Daniel Sarrabat. The latter is the source of five canvases painted for the chapel, still present in 1823.In 2009 the Park to Courly is assigned to the Joint Association of the Monts d'Or for a symbolic one euro. The Syndicat Mixte des Monts d'Or now has responsibility for the maintenance of the park. During summer 2009 the bread oven was renovated and new hiking paths are traced on the site. During the year 2013, pruning and clearing work permit to clear the long canal that ran along a roadway. In 2014, a former leading artificial waterfall at the end of long channel is clear.