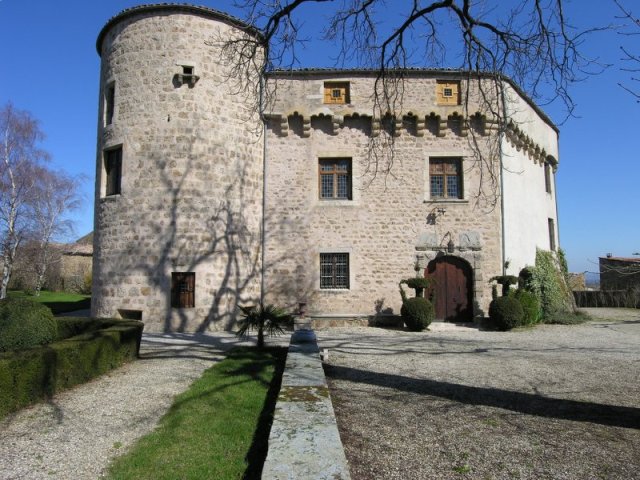 Location: Lupé, in the Loire departement of France (Rhone-Alpes Region).
Built: 15th-18th century.
Condition: In good condition.
Ownership / Access: Privately owned.
ISMH Reference Number: PA00117500
Notes: Château de Lupé is a castle, rebuilt in the Renaissance is located in Lupé, in eastern French department of Loire in France. As it stands today, it has the shape of an irregular polygon, like a capital D that seems to follow the bedrock on which it is built and is built around an attractive courtyard. Much thought and careful study of the construction has led experts to believe that at the end of the twelfth or early thirteenth century began by erecting a tower house, a sort of square tower of four levels and an enclosure that served barnyard. In the fifteenth century, the castle was given its present appearance by growing from this chamber and defining an inner courtyard whose function was to enlighten the newly created parts as well. The former dungeon was found included in construction, can still be seen in the northwest corner. The whole was crowned with a walkway on trefoil arches and battlements corbel triples. A new dungeon, circular, more symbolic than defensive spur was built at the southeast corner and he was known barricades and battlements, wearing a high conical roof.Access to the fortress, as it is now was a real castle, was done on the south side, through a single gateway to the valley and defended by a drawbridge and a gatehouse. The drawbridge was still attested in the seventeenth century. At that time, a fire in the attic was behind the disappearance of the covered way of the northwestern facade and the circular tower was leveled at roof level. We still distinguish the windows of the floor disappeared. The generations that have succeeded, have marked to the fashion and needs, sometimes a defensive aspect, sometimes a rustic air, sometimes refinement and grace of a country residence. Thus, this austere fortress was over the centuries made more habitable, including increasing the number of openings. During the Renaissance, the lords of the courtyard began to date by opening beautiful mullioned windows and Corinthian capitals.We find mention in 1066 of a lord of Lupé, Guigo Falasterius, in the cartulary of the monastery of Saint-Sauveur-en-Rue. This noble family Falasterius (Frenchified name in Falatier) built the castrum at the end of the twelfth century and retains it for more than five hundred years still transmitting by women. The land Lupé is transmitted through marriage in 1598 to Rostaing de la Baume, Count of Suze. At the beginning of the eighteenth, the family is virtually ruined and, having sold the barony of Bressieux in 1720, they split Lupé in 1734. The castle then definitely out of the family of nobles of Lupe and will be sold five times. The building is registered as historical monuments in 1981.