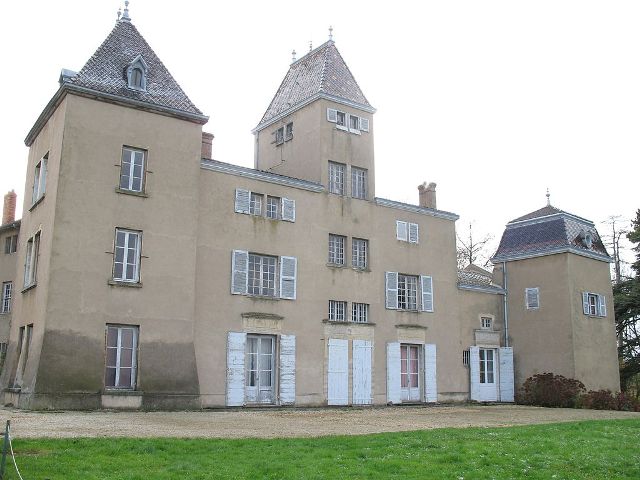 Location: Anse, in the Rhône departement of France (Rhone-Alpes Region).
Built: 17th century.
Condition: In good condition.
Ownership / Access: Private property.
Notes: Château de Machy is located in the municipality of Chasselay, in Rhône, in hilly terrain.The castle consists of various buildings without unity. The front main building on the plain, has a turret with a staircase, as was the custom in the seventeenth century, cross-old gave way to berries. A wing at right angles was added in the following century. Contains a large living room with French ceiling and painted above the doors. The chapel, which is on the corner, is bordered on the west by a balustrade porch added by Antoine Morand Jouffrey who also built another wing to the east and south of the common.A pigeon is drawn below the castle.In the Middle Ages, the stronghold of Machy is a large agricultural area. In 1556, J. Senneton bequeath to his wife a cluster of houses called the "puppet", which would be located on the site of the present castle. The construction of such a castle that currently begins in the seventeenth century-ee. The castle was acquired in 1778 by Jean-Antoine Morand of Jouffrey (1727-1794) for his son Antoine Morand of Jouffrey, then 18 years old. His family keeps well until the third quarter of the twentieth century, when Count Pierre Morand Jouffrey separates and 1978, the Cultural Office of Cluny acquires the field. Since 1996, the castle houses the Theatre Company of Arc-en-Ciel.

How To Get To Château de Machy (Map):