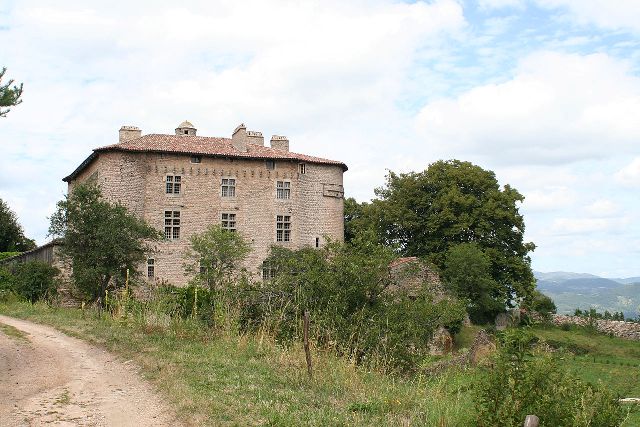 Location: Saint-Basile, in the Ardèche departement of France (Rhone-Alpes Region).
Built: 13th-16th century.
Condition: In good condition.
Ownership / Access: Privately owned.
ISMH Reference Number: PA00116778
Notes: The Château de Maisonseule is in the town of Saint-Basile in Ardèche. It dominates the Doux Valley. Its roof and facades are registered as historical monuments since 21 March 1983. Maisonseule Castle, built in the thirteenth and fourteenth centuries and rebuilt in the sixteenth century. Its envelope (façades and roofs) subject to registration as historical monuments since March 21, 19831 It is surrounded by a dry moat. The buildings are set around the courtyard and the tower of Saint Louis is located at the northwest corner. This rectangular keep of 12.60 m 8.20 m comprises the ground floor, a vaulted cellar barrel, three floors with the top floor which was crowned with a crenellated platform, with an outside walkway supported by stone corbels with wooden hoardings were still visible after the Second World War. There remains only one of the four watchtowers. In the fourteenth century were added the north wing, which includes a kitchen, dining and northeast tower, called "turn Oubliettes" and the east wing at right angles, which ends also with a corner tower . pigeon loft In the fifteenth century walls enclose complete the quadrilateral and the castle. In the sixteenth century the castle was transformed into a residence with mullioned windows opening in the dungeon, communication and door construction of a chapel on the first floor of the northeast tower. Then in 1624 the castle was completely redesigned, with construction of the staircase, the current door opening large windows with mullions. The floors are then rebuilt and beams are painted stenciled motifs of roses and lilies. The castle is open to the public in July and August.

How To Get To Château de Maisonseule (Map):