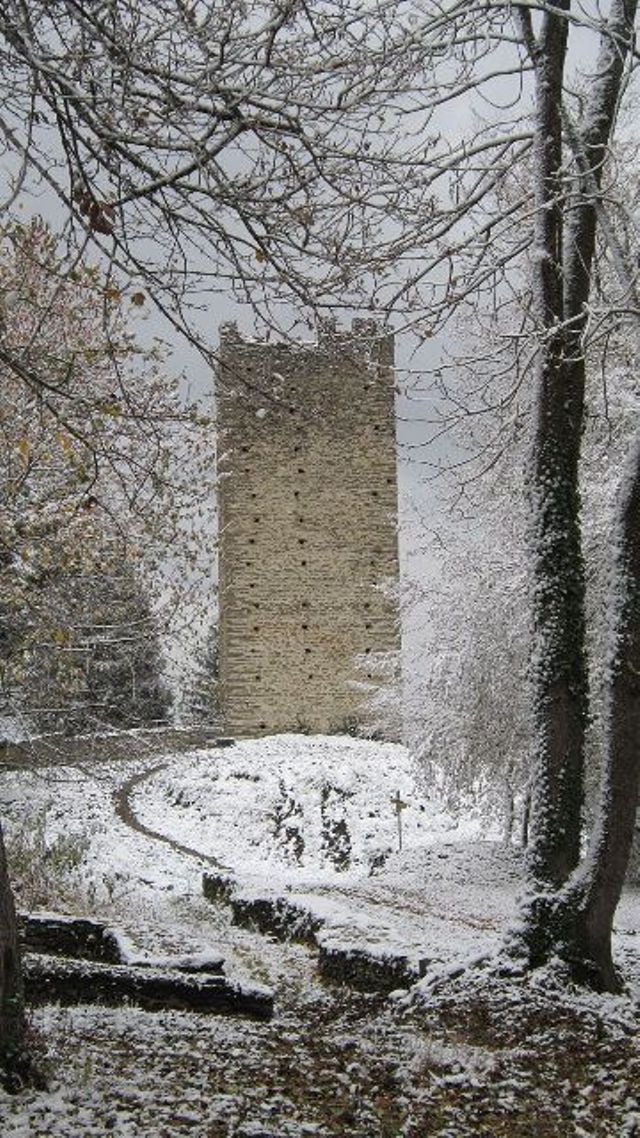 Location: Villard-Sallet, in the Savoie departement of France (Rhone-Alpes Region).
Built: 12th-13th century.
Condition: Ruins.
Ownership / Access: Owned by the municipality.
Notes: Château de Montmayeur is a former stronghold of the twelfth - thirteenth century, birthplace of the family of Montmayeur, center of the Lordship of Montmayeur, high in county in 1449, the ruins stand in the town of Villard-Sallet in the department Savoie region of Auvergne-Rhône-Alpes. The towers and the archaeological site connected with it are the subject of a registration as historical monuments by order of 19 September 1989. In 1997, the site is part of a thematic itinerary of discovery: Pierres-high of Savoie®. A trenched enclosure, rectangular, east-west oriented 250 meters long and 30-50 meters wide, contains the remains of the castle, occupied the twelfth century to the fifteenth century: the two tours5 dating from the late fourteenth century, two fortified houses, houses of non-noble, oven and the Saint-Julien church. The walls of this crenellated walls were pierced with loopholes and the fortress was reached by a drawbridge to the north. The square tower that rises in the east, 7.60 meters wide, has thick walls of 1.90 meters and 33 meters high. His unit is made of hewn schist rubble. It includes four planchéiés levels. The ground floor is blind, first floor, east, opens the gate to 12 m in height; this is the only opening with a small window, the second level is also blind, a crenellated platform occupies the top of the tower. A residential dwelling including a large room of the thirteenth century, to which was attached the sixteenth century two rooms in the old courtyard, was built at its foot. The western high tower of five floors on the ground floor, also embattled, isolated by a moat, built on a platform, also adopts a square. It has retained a height of 25 meters to 8 meters wide. Access is on the north by an arched door on the ground floor closed with a sliding closing bar in openings in the thick walls. On the front is the first level opens a small window, probably a gunboat and the second level two arched windows of 0.40 meters wide and 1 meter high that flank a fireplace with carved posts. Between the two towers that stand at either end of the platform, the fouillesNote 2 have identified the foundations of one (or two) likely strong house, a house and a furnace along a street, a rectangular enclosure and the church mentioned in 1191 and dependent on the abbey of Saint-Rambert-en-Bugey.

How To Get To Château de Montmayeur (Map):