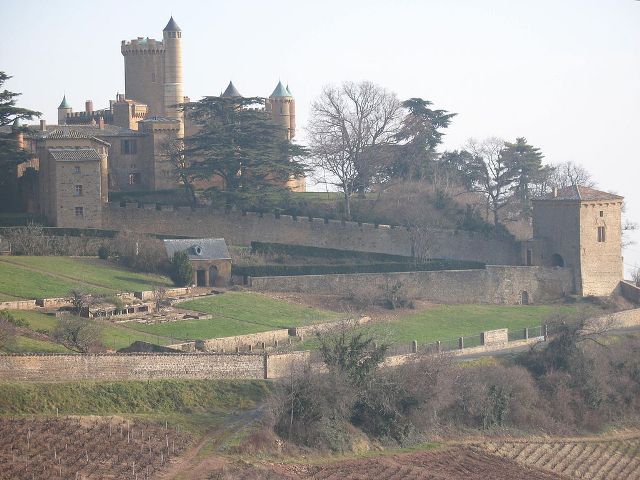 Location: Montmelas-Saint-Sorlin, in the Rhône departement of France (Rhone-Alpes Region).
Built: 13th-19th century.
Condition: In good condition.
Ownership / Access: Owned by a private company.
ISMH Reference Number: PA69000007
Notes: Château de Montmelas is an ancient castle, rebuilt in the thirteenth or fourteenth century and restored in a neo-gothic aesthetic of the nineteenth century, which stands on the town of Montmelas-Saint-Sorlin in the Rhône region Auvergne- Rhône-Alpes.The castle is the subject of a registration as historical monuments by order of 29 June 2000.There is mention of a castle from 977. In the eleventh century the fortress belongs to the lords of Beaujeu. In 1331, the owner is Jeanne Chateauvillain, third wife of Guichard VI of Beaujeu. In 1520, the fief belonged to Anne of France, Duchess of Bourbon, daughter of Louis XI and widow of Pierre de Bourbon, sire de Beaujeu. Their daughter, Suzanne of Bourbon, wife of the Constable Bourbon. The bourbons sell the lordship Philibert Crozet. His widow sold it to Philibert Albon fief Beaujeu baron of Lignières. The property falls thereafter to Aloysius Gonzaga, Duke of Nevers, husband of Henriette of Cleves. Jean Arod, husband of Barbe Signolles, bought the castle in 1566 during an auction. In 1593, Jean Arod is killed while repels an attack against his castle. In 1654, William Arod is lord of Montmelas. Arod François (1716-1752), Marquis de Montmelas, wife Marguerite Cuzieu. In 1766, their eldest son, Blaise, Marquis de Montmelas, wife Marguerite Catherine Haynault, mistress of Louis XV. She will remain in Montmelas until his death in 1837.During the Revolution, Gaspard de Montmelas, the younger brother of Blaise, is imprisoned in Lyon; a delegation of villagers take the road to the issue. At his death, in 1837, Agnes Louise widow of Gaspard Arod Count Montmelas and natural daughter of Louis XV recognized and Catherine Haynault, leaving the field to his great-granddaughter, Helen Louise Léonie Tournon Simiane (1829 -1899) wife of Count Philippe Tournon-Simiane. In 1906, Helen Louise Françoise Tournon-Simiane, previous daughter, wife Victurnien Jean Jacques de Chabannes La Palice. In 1962, Jacqueline Marie Leonie de Chabannes La Palice (1896-1982), previous daughter, wife of Count Jehan Durat inherits. The castle passed to his eldest daughter, Françoise de Durat wife of Count Henry of Harcourt. The area now belongs to the family of Harcourt.Built in the twelfth century, the castle was substantially amended over the centuries and especially in the nineteenth century, after 1828 by Louis Dupasquier, Lyon contemporary architect Viollet-le-Duc, after a drawing of the seventeenth century. It retains many elements of the fifteenth and sixteenth centuries and the work aimed to restore a complete medieval fortress. The outer enclosure is crenelated. There remains of the medieval castle a cylindrical tower that dominates a square enclosure provided at the corners of pepper and a wide yard fenced with breeches. The property is a winery. Castle Montmelas is private property. It is open to visitors. The buildings and gardens have been registered under the historic monument on 29 June 2000. This includes castrale pregnant, castle, common, towers, porches, the chapel and the course, the poultry castle courtyard, the winery and the pantheon.

How To Get To Château de Montmelas (Map):