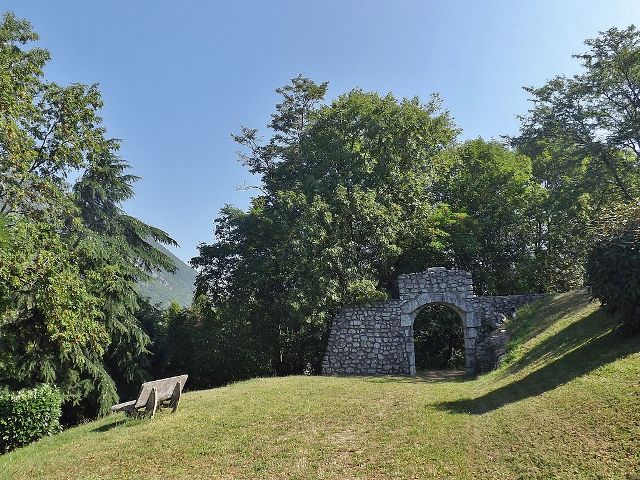 Location: Montmélian, in the Savoie departement of France (Rhone-Alpes Region).
Built: 11th-18th century.
Condition: Ruins.
Ownership / Access: --
Notes: Château de Montmélian is an ancient castle of the eleventh century whose remains stand in the town of Montmélian in the Savoie department. Home to some counts of Savoy, it was the seat of the Bailiwick of Savoy and a lordship. It was reinvigorated in the sixteenth century and dismantled in the early eighteenth century. The former castle had a trenched wall of 70 x 60 meters. It will be integrated and will remain inside the fort high bastion in the sixteenth century by the Duke Emmanuel Philibert. Today, there are only meager remains: some sections of walls, the old lime kilns, two wineries, facing the peak Blondet. One of them has its breakthrough vault with a circular hole and provided access to an underground, the other is also arched and pierced obliquely from a semi-circular hole. Nearby, a trench, probably the remains of shops, and a well whose opening is at ground level. On the top of the rock, known as the "big tower", there is a vast cave, probably one that was located under the tower. Many underground, virtually all clogged, ran under the fort. It notes, Isere side, the "cave of great help"; that communicates with the city opened on the site of the present church. city ​​side, facing the rock Calloudes behind the castle of Perugia, there remains a fragment of one of the bastions of the Annunciation said. Ramparts, remains the "parapet" and part of the walkway called "on the walls."