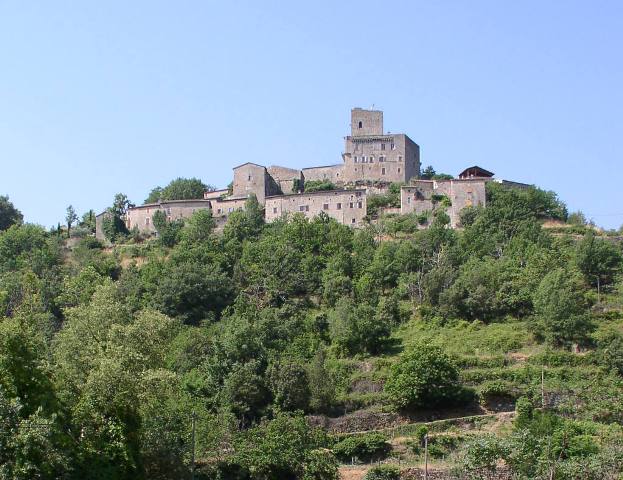 Location: Mirabel, in the Ardèche departement of France (Rhone-Alpes Region).
Built: 16th century.
Condition: In good condition.
Ownership / Access: Private property.
ISMH Reference Number: PA07000007
Notes: Château de Montréal is located in the town of Montreal in the Ardèche department. This is actually two adjoining dwelling; one medieval and the other Renaissance.he castle of Montreal is located in the heart of the old province of Vivarais. It is under the jurisdiction of Viviers-Bishops Counts (hence the name `` Vivarais``), the Holy Roman Empire and Counts of Toulouse (Raymond of St Gilles). And it was not until the late thirteenth century the province of Vivarais happening in the royal domain. But the rulers of Balazuc remain always faithful to the King of France, which explains that the village of Montreal remain Catholic in the midst of a land that has largely converted to Protestantism ... The construction of the castle of Montreal is built on formerly Mt. regalis called Mount and Mount Royal, Mont Réal then, to finally become Montreal. Work began in the twelfth century by the great tower and will continue until the seventeenth century. Its dominant position on the surrounding valleys is a major advantage. Indeed, the valleys of the line and Roubreau lead Argentaria, mining town where the silver-lead is exploited since the Gallo-Romans, when the Ardèche named Helvie. Argentaria, today became Largentière meant the money from the land and therefore had extremely coveted mines and that it was essential to defend. The Bishops of Viviers will then entrust to noble families, monitoring and defense of access roads and territories around the mines. They therefore build towers and fortresses on all the surrounding hills, but with its highest point at more than 30 meters high that Dungeon Montreal will be the jewel in the crown castrale, counting also Sanjeaux, Brison, vinezac and Tauriers. In 1345, the Balazuc acquire the castle and the Gothic castle built next to the castle novel. It's August 9, 1343, the Montreal Balazuc and seal their union by marriage Pelette of Montreal and Albert II of Balazuc. The Balazuc will then head to the fortress of Montreal for 3 centuries. In 1638, Montreal through marriage to Hautefort Lestrange and, in 1742 to Merle Lagorce that take away the Aubusson tapestries of the castle, which are now found in the town of Vallon-Pont-d'Arc.