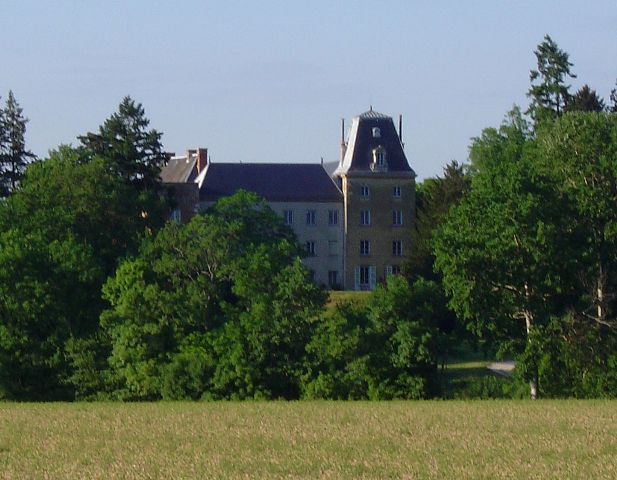 Location: Saint-André-de-Corcy, in the Ain departement of France (Rhone-Alpes Region).
Built: 18th century.
Condition: In good condition.
Ownership / Access: Privately owned.
Notes: Château de Montribloud is an ancient fort castle high on a Poype by Humbert V Thoire-Villars in the early fourteenth century, restored in the nineteenth century in a neoclassical style, which stands in the municipality of Saint-André-de- Corey in the Ain department in the region Auvergne-Rhône-Alpes. The castle was the center of the lordship and barony and finally Montribloud County.. Anyway, at the beginning of the fourteenth century Montribloud was still a locality belonging to Hugh Brown, canon of the city of Lyon and obédiencier of Saint-Just, who enjoined his heirs are build a religious house in his will in December 1313. The last will of the canon was not executed, and the wide Poype which was sitting the new monastery, the lords of Thoire-Villars built a castle. February 21, 1334 Humbert V Thoire-Villars honors Viennese dolphin to the dungeon Montribloud he just stand on the Poype. April 4, 1354, Humbert VI Thoire-Villars gives John and Antoine Corlier the office and rights of champerie and Forestry St. Andrew and Montribloud. The same Humbert VI, in his will of 16 December 1369, assigned a pension of 10 pounds in mandamento of Montriblou, children of William, bastard of Villars.October 31, 1384 Humbert VII Thoire-Villars gives, in exchange for Beauvoir earth Bugey, Eudes de Villars, lord of Montellier, his cousin, the lordship of Montribloud with all justice and the stronghold of parishes Saint-André, Civrieux, Bussiges and Saint-Marcel. After the death of Eudes de Villars, died childless Montribloud passed in 1418, his great-nephews, son of Joan Tower and Jean de La Baume, Earl of Montrevel and Marshal of France. It remains in the powerful family of La Baume up Antoine, Earl of Montrevel, who sold it in 1590 to Martin and Jean de Covet, lords Mure, rich merchants drapers from Bresse. The Covet will transform the strong castle surrounded by a moat with a Renaissance mullioned windows. On 8 August 1660, Antoine de Covet, Marquis de Villars , gets the barony of Montribloud be erected in the county.In debt, his grand-son Jean-Baptiste de Covet is driven to sell, January 24, 1754, the lordship of Montribloud to his creditor, Pierre Nicolau, alderman and treasurer of the city of Lyon. Inheriting his father's castle, Christophe Nicolau commits the famous urban architect Lyonnais, Jean-Antoine Morand, to rebuild it according to his rank. The Poype is enlarged, the castle adopts a neoclassical plan and a French garden is created. But accused of mixing personal accounts with those of the city of Lyon, he fled to Paris. His son Antoine Nicolau gives way to a Lyons banker Melchior Bodin in 1826, whose son Alexander Bodin, who is member of the Ain, first in 1848 and the Legislative Body, transforms the look of the castle by introducing slate roofs in the fashion of the time, while it is reshaping the English gardens. The present castle has changed little since allure and still belongs to the family Bodin.The castle built of brick is a typical specimen of neoclassic castles of the Dombes. The castle is usually closed to the public. During the Heritage Days, in odd years, the Bodin family opened the castle to visitors.

How To Get To Château de Montribloud (Map):