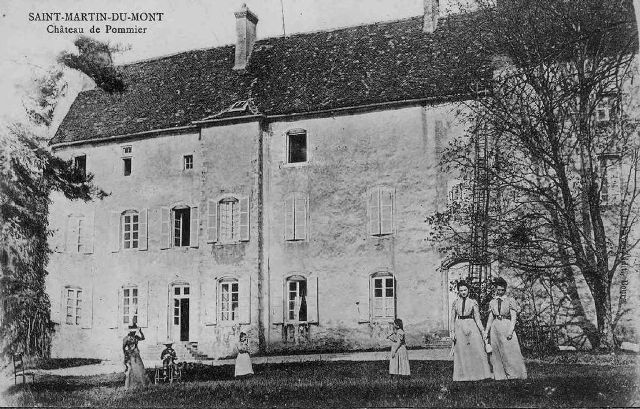 Location: Saint-Martin-du-Mont, in the Ain departement of France (Rhone-Alpes Region).
Built: 11th century.
Condition: --
Ownership / Access: Privately owned.
Notes: Château de Pommier is a castle located in Saint-Martin-du-Mont in the Ain in France.The castle dates from the thirteenth century and was possibly built on the site of an ancient oppidum. It has been regularly overhauled the fourteenth century to the eighteenth century. Medieval elements as the tower or the vaulted chapel cross of the fourteenth century warheads were kept. The first owner and arguably the castle builder is Guy de Sales. In 1358, his grand-son receives the Count of Savoy the allegiance of Saint-Martin-du-Mont. The descendants of Guy de Sales maintains the field until 1548 and the sale to the family of Grillet. Nicolas de Grillet is the first domain owner Grillet; His son Charles Maximillien of Grillet inherit (he is buried in the Sain-Martin-du-Mont Church). Eventually the Moyria families, Maillat, Chatelard, Conzie the eighteenth century - which come from Joachim François and Louis-Hilaire Mamert of Conzie - and Count Loras succeed the head of the field. In 1848, the castle was purchased by Sylvain de La Forest Divonne.

How To Get To Château de Pommier (Map):