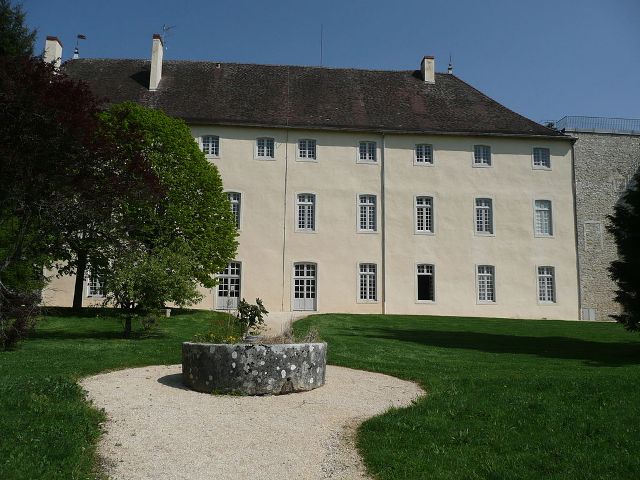 Location: Pont-d'Ain, in the Ain departement of France (Rhone-Alpes Region).
Built: 14th-18th century.
Condition: In good condition.
Ownership / Access: Owned by a private company.
ISMH Reference Number: PA00116532
Notes: Château de Pont-d'Ain is a castle of the fifteenth century, rebuilt in the sixteenth century and modified century3 nineteenth century, the manor center of Pont d'Ain, which stands on the town of Pont-d'Ain in department of Ain, in region Auvergne-Rhône-Alpes. It succeeded an ancient castle built before 1285 by the lords of Coligny.The castle is the subject of a registration under the Historic Monuments by order of 18 October 2004. The castle of Pont d'Ain, rebuilt in the sixteenth century appears as a rectangular main building on three levels, plus the attic which was remodeled in the mid-eighteenth century and covered with a steep hipped roof. The ground floor houses a particular paneled room and a wooden staircase from the same period dated from 1594 and restored in the nineteenth century; the first floor, a painted chapel of the nineteenth century and religious paintings dated from 1849 in a room on the second floor, are the most significant elements. The courtyard is surrounded by two buildings one of which is partly rebuilt on medieval walls. Dependencies, retain the old parts, medieval walls, a vaulted cellar, probably fourteenth-century well and oven. Remains ditches remain south and north, and a gazebo included in the old fortifications. At the edge of the esplanade of the remains of towers, buttresses and a shaved part of the castle with a wall coussiège, a fitted stone tower called "Tower of the porter." The spur on which is built the castle was crossed with a huge gap as evidenced by the Imperial cadastre compiled at the beginning of the eighteenth century. Today that gap has virtually disappeared. A park with old trees surrounds the castle. The building of the grand staircase tower said Marguerite had been listed historical monument February 22, 1927, and the castle and its large common was registered on 13 September 2004. The site itself is registered since August 30, 1946.