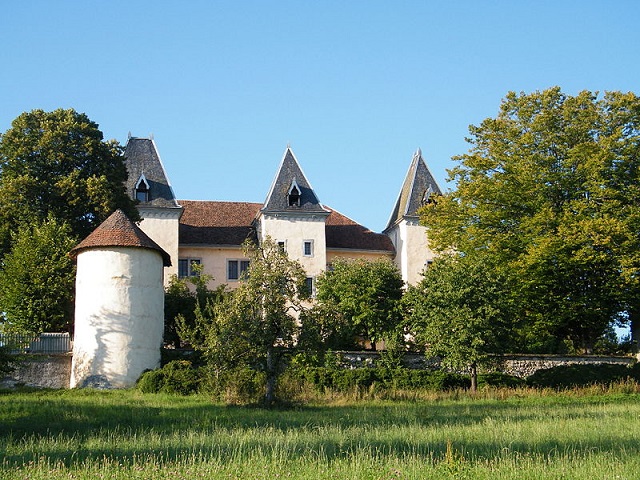 Location: Pringy, in the Ain departement of France (Rhone-Alpes Region).
Built: 14th century.
Condition: --.
Ownership / Access: Durand family.
Notes: The castle of Promery is an old strong house, from the fourteenth century, which stands on the town of Pringy in the Haute-Savoie department in the Auvergne-Rhone-Alps region. The castle has been partially registered as a historic monument by a decree of 20 July 1951. Only the facades and roofs and two doorways are inscribed.Its origin remains unknown to us; Its edification could be before the fourteenth century and be the possession of the Trombert family. On November 14, 1316, Pierre de Monthouz passed an act: "in his stronghold of Promery." Les Monthoux kept it until 1578. Claude de Monthouz gave it to Humbert de Menthon-Lornay, his grandson, with a ban on alienating him. On November 22, 1618, René Favre de la Valbonne, the eldest son of Antoine Favre, senator and president of the Genevan council, yielded it. René Favre did some important work there, and in 1656 she bequeathed it to her son Gabriel Philibert with the condition that he would donate a sum of 2,500 livres to the chapel of Promery. Which will be done two years later. Gabriel Philibert died in 1693. His daughter received it as a dowry in 1687, and will continue to enjoy it until his death in 1754. By trial, the fortress passed to Marie de Villaret, daughter of Marc Antoine, in 1772 -even eldest son of Gabriel Philibert, who had contested the donation made to his sister by their father. On the death of Marie de Villaret, which occurred in 1783, Promery went to Marie Antoine de Laplace, her son. At the time of the Revolution, having emigrated, his castle was confiscated and sold as national property on July 14, 1796 to Mr. Delatte of Annecy against the sum of 16,662 livres. On December 21, 1813, Mr Delatte handed him a sum of 10,000 francs to Mme de Lagrange, daughter of Hyéromine Dufour, herself the sister of Marie Antoine de Laplace. Later the castle burned down, leaving ruins, and was then sold to a family that completely restored it with passion, so that this historical heritage can still remain in the memories. It belongs today to a family, private, Durand family.A quadrangular enclosure encloses a three-storey main building on the ground floor, flanked by square towers. One enters the courtyard by a door framed by two towers. On the walls of the castle, exterior and interior, there are twenty-four inscriptions. The west tower contains several paintings and the portraits of President Favre, Rene Favre, Marie de Villaret, Hyéronime de Laplace and Vaugelas can also be seen inside the castle.

How To Get To Château de Promery (Map):