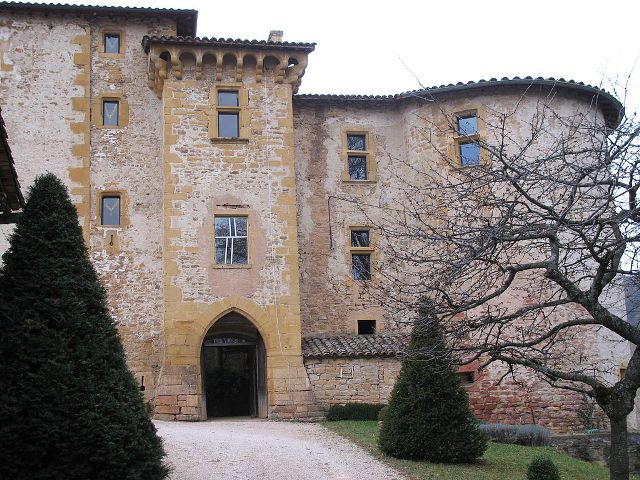 Location: Theizé, in the Rhône departement of France (Rhone-Alpes Region).
Built: 13th-16th century.
Condition: In good condition.
Ownership / Access: Privately owned.
ISMH Reference Number: PA00118078
Notes: Château de Rapetour, sometimes spelled raptour, is a stronghold of the thirteenth century that stands at the entrance of the village of Theizé in Beaujolais in the Rhône department. It is a quadrangular building flanked at the northeast corner of a round tower of the sixteenth century and the Northwest corner of a square tower of the fourteenth century; The building in its oldest parts is provided bretèches, battlements, a walkway, with loopholes, to arbalétrières, loopholes and a watchtower. Inside the house, the family of knightly Viego built a "lecture hall" and a chapel in the thirteenth century, to show their membership in the aristocratie4 and a camera or stately room. Remarkable architectural elements have thus been preserved. We discover in the courtyard, on three levels, an exceptional Italian gallery of early sixteenth century based on golden stone arches basket handle. Said gallery decorated with coats of arms of various owners and sculptures of stone faces of Varennes, his son Hippolytus and his wife. The gallery is reached by two stair turrets vis5. Castle has Rapetour graces that can only come from the other side of the Alps and looks just like the Tuscan castello such as painted them giusto utens in his glasses. Rapetour is a castle that has to be understood through the proper humanist in Lyon in the sixteenth century. Castle Rapetour, is open to visitors every weekend from April 15 to October 15 (Saturday and Sunday afternoon).