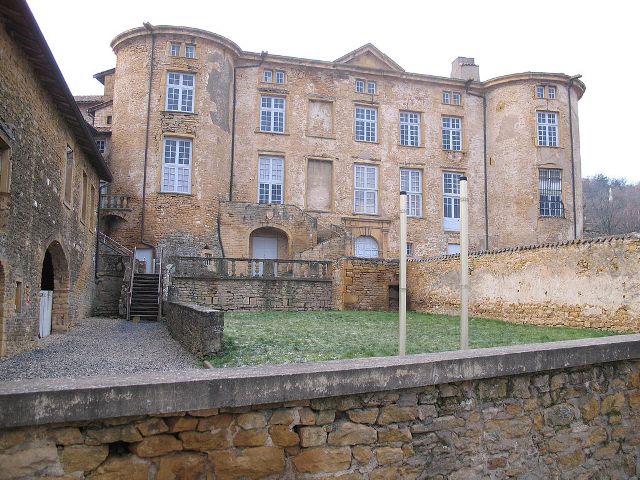 Location: Theizé, in the Rhône departement of France (Rhone-Alpes Region).
Built: 16th-18th century.
Condition: In good condition.
Ownership / Access: Privately owned.
ISMH Reference Number: PA00118079
Notes: Château de Rochebonne is an old fortress, rebuilt in the fifteenth century and rebuilt in the seventeenth century that stands in the municipality of Theizé in the Rhône department in Auvergne Rhône-Alpes region. The construction consists of a building flanked by two round towers with a flat roof topped by a triangular pediment and preceded by an elevated deck. The home consists of a ground floor, two floors and an attic floor pierced by three pairs of small square openings. The eastern façade, in classical style, was disfigured by the transformation of the castle farmhouse. Inside, we note in particular the room of the lord, the floors and the paneling date back to the seventeenth century, the trompe l'oeil of the great room and vaulted cellars. Several restored rooms are open to the public. A museum to discover an imposing wooden press. The castle, its external staircases, a vestibule and a grand staircase and common were registered historic monument December 21, 1984.

How To Get To Château de Rochebonne (Map):