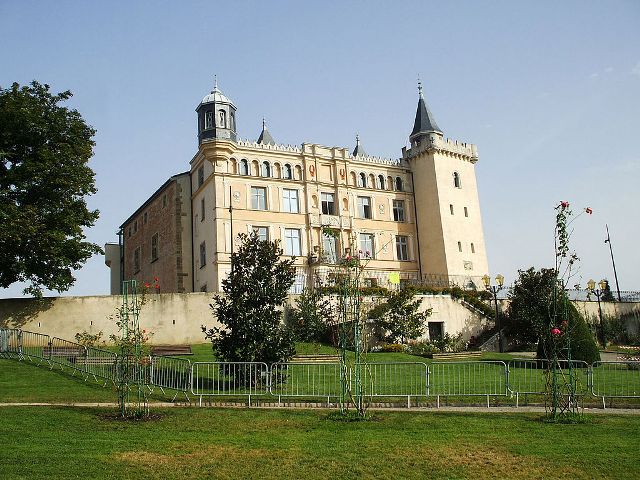 Location: Saint-Priest, in the Rhône departement of France (Rhone-Alpes Region).
Built: 14th-19th century.
Condition: In good condition.
Ownership / Access: Owned by the municipality.
ISMH Reference Number: PA00118053
Notes: Château de Saint-Priest is an old fortress, founded in the fourteenth century, which stands in the municipality of Saint-Priest in the city of Lyon in region Auvergne-Rhône-Alpes. The castle is the subject of a partial registration as a historic monument by decree of 28 December 1984. The castle of Saint-Priest was fully renovated and now hosts events business and social events in Delegation with the city of Saint-Priest. Its spaces are sold by the GL Events Group since 1999. It is an event site hosting various types of events: seminars, conventions, exhibitions, gala dinners, cocktails ... from 20 people and up to 600 participants. The Château de Saint-Priest, property of the town of Saint-Priest, also hosts cultural events. The program is an initiative of the Mayor who has a right to privatize spaces.At the beginning of the fourteenth century, a strong first house is built. Around 1438 a tower of 8.31 meters wide was built on the northeast corner; in 1450, appears the north wing, where a monumental staircase will be built in the seventeenth century; the eighteenth century, the two facades of the main building were rebuilt; between 1995 and 1998, a major renovation takes place under the leadership of Mayor Bruno Polga, including the demolition and reconstruction of the interior walls. The present castle includes a main building oriented east-west and two buildings, one north, one south, occupying all three sides of a quadrangle, the fourth side being closed by a modern construction ( two round towers and a large glass and metal structure). A square tower protrudes into the southwest corner and a watch tower dating back to the early twentieth century crown the northwest corner. The western facade floor on four levels; an ornate front building occupies the central bay; the first three levels consist of five sections in total; the upper level is pierced with six small windows and decorated with an arcade supported by posts. The north facade, brick, is pierced by two windows and six small openings. The south facade has six windows and five small openings. To the west, a terrace and a double flight monumental staircase gives access to the gardens.