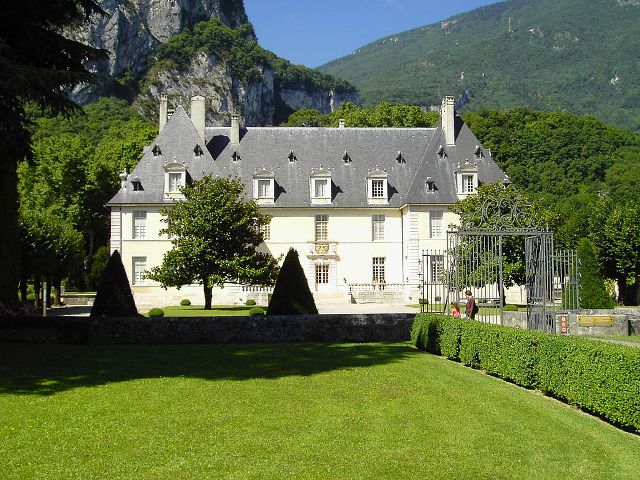 Location: Sassenage, in the Isère departement of France (Rhone-Alpes Region).
Built: 17th century.
Condition: In good condition.
Ownership / Access: Privately owned.
ISMH Reference Number: PA00117279
Notes: Château de Sassenage formerly known as Castle of Beranger is a pleasure palace built in the seventeenth century, standing in the territory of the town of Sassenage in the Isère department in Auvergne-Rhône-Alpes region. He succeeded an ancient castle of the thirteenth century. This vast mansion is the third to have been built on the same site, at the foot of the Vercors cliff by the powerful lords of Sassenage.ayant retained its original furnishings, decorations and paintings, it remains, in certain periods, open to public visits.The castle, the park and the alley of chestnut trees leading to the castle are the subject of a classification as a historic monument by decree of September 9, 1942.A first castle "castrum Cassinatico" is attested in the thirteenth century. The present castle was built from 1662 to 1669 by Laurent Summary for Baron Charles Louis Alphonse de Sassenage, Marquis of Pont-en-Royans. This is an acknowledgment of the castle, last house built by the lords of Sassenage. Parish Sassenage was historically the seat of one of the four baronies of the Dauphine and played a very important role in building this province. The House of Sassenage which had the title would end Lusignan-Poitiers.