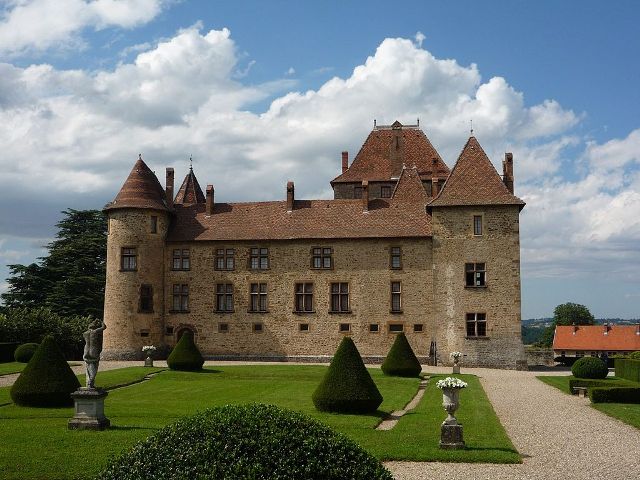 Location: Septème, in the Isère departement of France (Rhone-Alpes Region).
Built: 14th-16th century.
Condition: In good condition.
Ownership / Access: Privately owned.
ISMH Reference Number: PA00117285
Notes: Septème Castle is an ancient castle, fourteenth century, rebuilt in the fifteenth and sixteenth centuries, which stands on the town of Septème in the Isère department in Auvergne region Rhône-Alpes. The site focuses the ruins of a first castle of the eleventh century, a speaker of the thirteenth century and the present castle which dates back to the fourteenth - fifteenth century. Under the Historic Monuments; the walls, the remains of the first castle and the ramparts of the old city are being ranked by order of 12 February 1942; Castle, the concierge and the park are subject to registration by order of 27 February 1947.A powerful speaker about 1 kilometer long is erected in the fourteenth century by the counts of Savoy. Well preserved with its doors and archers, she layered a massive fortress of the fifteenth century with an irregular quadrangular. One enters the chamber through a door to the north. It is then at the site of the former village, now occupied by the outbuildings. Around a courtyard are arranged the house as round or square towers dominate the angles, one square plan is a great dungeon. Inside the plain castle was built in the twelfth century a strong home, "modern" origin of the castle from the fourteenth - fifteenth century and whose duty room occupies the entire ground floor. A round tower was added in the fourteenth century, linked to the strong house by a wooden walkway. In the sixteenth century fortified house is elevated two-story becoming the keep and the wooden walkway replaced with two loggias in the Renaissance style.

How To Get To Château de Septème (Map):