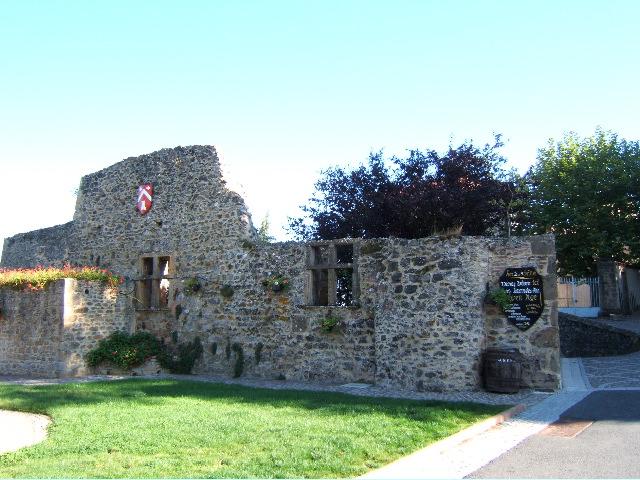 Location: Ternand, in the Rhône departement of France (Rhone-Alpes Region).
Built: 12th century.
Condition: Ruins.
Ownership / Access: Now a public garden.
Notes: Château de Ternand is an ancient castle of the thirteenth century, rebuilt in the thirteenth and sixteenth centuries and destroyed in 1562, the ruins stand in the town of Ternand in the Rhône department in Auvergne Rhône-Alpes region. The fief belonged to the archbishops of Lyon around 1210, Renaud de Forez fact fortify the site. In 1562, the Huguenot troops led by the Baron of Adrets destroy the castle. Therefore, the seat of the manor was transferred to Castle Ronzières, on the other side of Azergues, also located in the municipality of Ternand. From the original construction, it remains a part of the walkway, which offers a beautiful view over the mountains of Tarare, the ruins of the medieval castle and a remnant of the dungeon which amounted to only 17 meters; initially it measured 31 meters. A drawbridge between the castle and the keep, gave access to the fortress. The castle site is now a public garden.