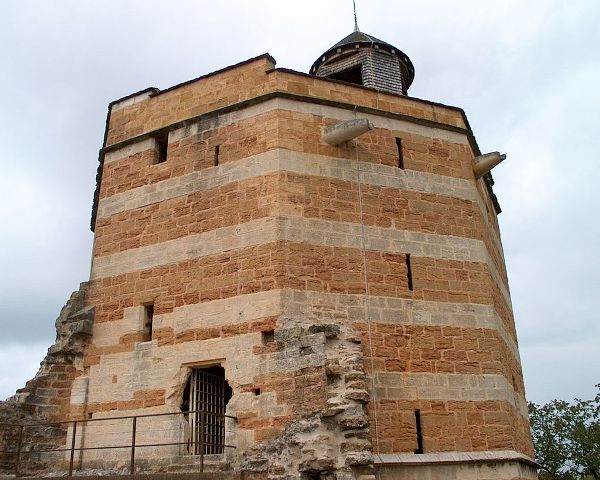 Location: Trévoux, in the Ain departement of France (Rhone-Alpes Region).
Built: 13th-14th century.
Condition: Partially ruined.
Ownership / Access: Owned by the department.
ISMH Reference Number: PA00116582
Notes: Château de Trévoux is an ancient castle, the late thirteenth century or early fourteenth century, rebuilt and restored several times, the remains of which stand in the town of Trévoux in the department of Ain, in the Auvergne region -Rhône Alps. The castle was the center of the Lordship of Trévoux and the county seat of a lordship of the principality of Dombes.The remains of the castle are the subject of a classification as a historic monument by decree of June 13, 1913.If he remains today sufficiently large and visible remains to attract many visitors there, the building suffered significant damage due to centuries of abandonment and the Revolution. It is still today connected to the city by a long boundary wall which adjoins the octagonal tower to the east and the north western corner of the yard. Built around 1120, according Guichenon, the castle was renowned for its strength and importance. The octagonal tower is remarkable. This tower, which measured 65 meters in height before being lowered to 17 meters in 1793. The plane on which it is raised is that of isolated Roman towers, described by Montfaucon, explained in its antiquity. It is possible that it merely replaces one of these ancient observation towers; but what is very clear is that it predates the remainder due castle. The triangular plan due to the castle topographic configuration has nowadays a court that define three walls two of which are pierced with a sheath originally built. They have lost about a quarter of their height that is given to us through the gates of the second stages of the north and south towers that served the parapets. Every corner of this courtyard is flanked by a tower to the east, the octagonal keep, reduced by three-quarters of its height; Tower horseshoe north and the round tower to the south. tear traces on the outside of the south wall indicate the presence from the outset a small tower using latrines near the door leading into the yard near the octagonal tower; its foundations protruding from the ground a few tens of centimeters us about his plan in irregular pentagon. The remains of a fireplace suspended from the west wall testify to the location of the main building in the yard. On the property next door, it is possible to see the remains of what appears to be a square tower to the west. The layout of the walls that connected the rest of the castle is still visible on the ground although it remains almost nothing. These walls demarcating a square farmyard attested by a 1813 plan which also included what appears to be the main castle entrance protected by two turrets. Outside the castle and the city, a slight elevation of the land, however sufficiently pronounced to be easily visible on the site seems to be the remnant of the old moat.