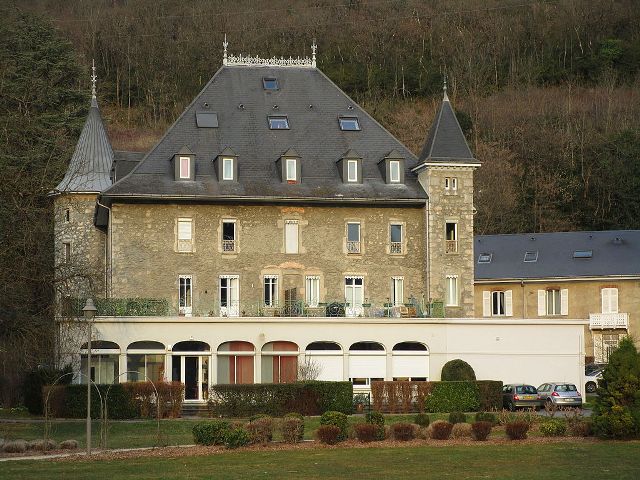 Location: Challes-les-Eaux, in the Savoie departement of France (Rhone-Alpes Region).
Built: 16th century.
Condition: In good condition.
Ownership / Access: Apartments.
Notes: Château de Triviers is a sixteenth century castle located in France in the town of Challes-les-Eaux, in the Savoie region in Auvergne-Rhône-Alpes. The castle was built around 1550 by the noble Berthier, Secretary of the Chamber of Accounts, attorney and counselor of state. In 1613, the building became the stronghold of Saint Vincent and Francis, the son of the noble Berthier, receives the title "Lord of Saint Vincent." Soon after in 1637, the area is enlarged by the dot Lucretia Raffin La Biguerne during his marriage with the owner at the time, Claude Gaspard, who married his second wife Catherine Guillet From Montoux with whom he has a son, Alphonse Berthier De Saint Vincent. In 1700, the son of Alfonso Thomas, died without a direct descendant. After lengthy legal battles, the property is given to Berthier Jean-Louis De Saint Vincent in 1710. But he lives in Italy and sold the castle in favor of his sisters remained in Savoy. One of them marries the lawyer Bally takes the "Saint Vincent" before leaving shortly before the French Revolution. In 1800 the area, which then belongs to Ms. De La Biguerne Favier, the granddaughter of Bally, has expanded to 50 hectares, bringing the total area to 108 hectares. When her husband dies, she married the Marquis De Paul Oncieu Chaffardon. At the end of the century, the castle was acquired by Louis Vuillerme that transforms the hotel under the name Hotel d'Angleterre in 1883. He again changes hands and becomes Villette rafters of the property that the landscape in several apartments in 1890. During the war, the castle was used as a pension. In 1921 Rouveyre buys and then sells it in 1939 to Lucien Clanet. In 1946, the castle became the seat of the National Center of Civil Aviation and then again becomes a hotel in 1949 and ranks among the best institutions in the region under the name of Hotel Castle Triviers until 1956, when it serves as a summer camp for children of workers in Chantiers de l'Atlantique in Saint-Nazaire. It becomes again a hotel in 1966 and is managed by Jean Clanet, son of Lucien. In 1995, the hotel is sold as apartments.