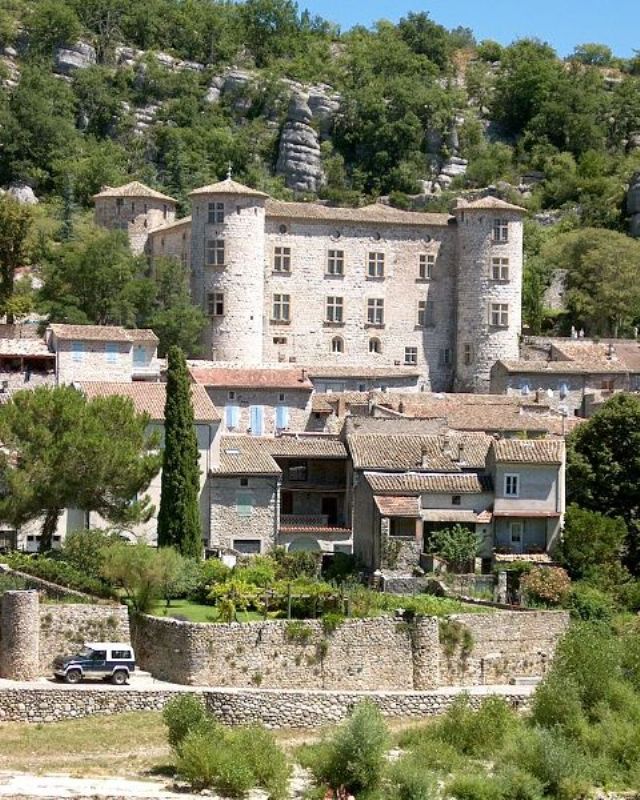 Location: Vogüé, in the Ardèche departement of France (Rhone-Alpes Region).
Built: 12th-17th century.
Condition: In good condition.
Ownership / Access: Privately owned.
ISMH Reference Number: PA00116868
Notes: Château de Vogüé is located in the town of Vogüé of the Ardèche department. The castle was built in the late twelfth century on the order of Raymond I of Vogue. Became the fourteenth century property of La Gorce then of Rochemure of Besset, the castle is transformed by the addition of four rounds. In 1603, the family of Vogue takes possession of the building, it is developing according to the Renaissance style. At this time is particularly created the garden suspended over the moat filled. The castle was abandoned from the move of Charles de Vogue the Château d. Castle Vogüé is sold as national property during the French Revolution, but was purchased half a century later, in 1840 by Leonce de Vogue that restores and installs a school run by the Sisters of St. Joseph of Aubenas. The firm establishment in 1960. September 12, 1969, the castle is the subject of a registration as a historical monument by decree, which protects facades and roof. Still owned by the family of Vogue, opened it to the public in 1971.