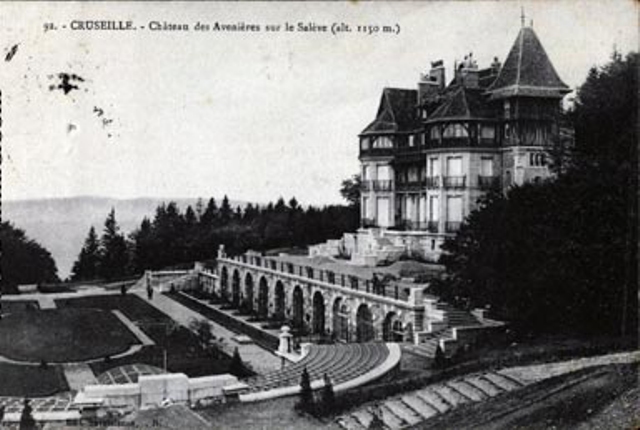 Location: Thorens-Glières, in the Haute-Savoie departement of France (Rhone-Alpes Region).
Built: 19th century.
Condition: --
Ownership / Access: Privately owned.
Notes: It's an American, Mary Wallace Schillito, that we owe the Château des Avenières. While she is on holiday in Geneva in 1904, she went on tour with a friend, Marcelle Sénard on the Salève. She finds the current location of the castle, which is offered to her look the panorama of the Alps, Mont Blanc and Lake Annecy. She plans therefore be there to build a house. In 1905, the death of his father, tycoon American railroads, the single leaves heir to a large fortune. The work of the castle then begin and end in 1907. The thirty-five rooms of the castle host large receptions, where Mary will also meet an Indian engineer Assan Farid Dina, who became her husband in 1914. He was born in 1871 in Mauritius, a Pakistani father and a French mother, prematurely dead in Ceylon. Dina in 1917, complete construction of the castle by the completion of a power plant and the capture of a source whose lords are also enjoy the nearby residents. Passionate esoteric and astronomy, it is planning to build an observatory on the Salève and built a road to the summit. He joins a chapel in the castle, the walls are engraved with "The Universe is an egg, the egg is a Universe" and are covered with mosaics depicting the Tarot cards according to Oswald Wirth. The castle became the meeting place of the good Parisian society, who come here to discuss philosophy, esotericism and Egyptology. In 1928 Assan Farid Dina is unwell and died crossing the Suez Canal on an English schooner that was taking him to Ceylon, where he intended to visit the grave of his mother. Mary Dina widowed wife in 1930 a Belgian pianist Ernest Britt. The couple's lifestyle is extravagant and Britt squandered almost all of the wealth that Mary divorce in 1936 and sold the castle before settling in Switzerland. A company becomes owner of the castle which houses several tenants in turn, a Polish religious congregation from 1938 to 1939 and during the Second World War, in 1942, the Swiss Aid to the Children of War there welcomes young patients. It is then the famous college of Juilly who buys and settled from 1948 to 1970. Among college students, then include Claude Brasseur, Jean-Jacques Debout and Philippe Noiret. In 1970, an Annemasse wine merchant who became owner of the castle, who at his death in 1978, was purchased by a Swiss architect Pascal Häusermann. Since 1994, this is company that owns the castle and operates as a renowned hotel and restaurant. In 1996, Phil Collins moved there for a few months to save Dance into the Light. The same year, José Giovanni is shooting Crime altimeter. Then in 2004, Pascal Thomas who makes the first pictures of little bird told me .... The Château des Avenières is now identified by Condé Nast Johansens.