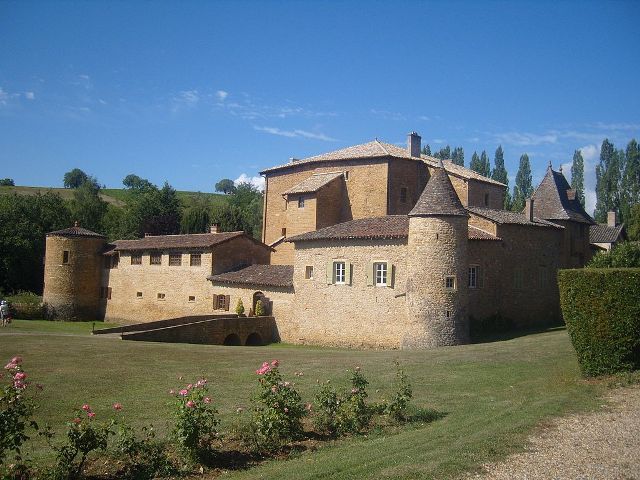 Location: Lacenas, in the Rhône departement of France (Rhone-Alpes Region).
Built: 14th century.
Condition: In good condition.
Ownership / Access: Privately owned.
ISMH Reference Number: PA00117773
Notes: Château du Sou is an old fortress, the fourteenth century, rebuilt in the nineteenth century, which stands on the town of Lacenas in the Rhône department in Auvergne region Rhône-Alpes. The fortified gate of the castle is the subject of a classification as a historic monument by decree of February 21, 1933.Construction, golden stone Beaujolais, dates to approximately 1369. The fortifications, which layered dungeon, flanked by round towers at the corners, forms an almost perfect square. Access to it is through a gate tower commanding a drawbridge, and the passage is defended by a gatehouse corbelled maneuver between the two grooves of the drawbridge levers which there remains some traces and those moat. The keep, a tower residence, square top home three floors on the ground floor, fitted in the corners of corbelled turrets, is preceded by a small square front building on one of its facades. A Gothic chapel contains sculptures, two angel heads. north side, the fortified gate, decorated with 13 coats of arms, has, over the crest of Gaspard, left, six times the same coat of arms and right, six coats of arms in relation to their wives. During the Revolution, these faces were hammered.