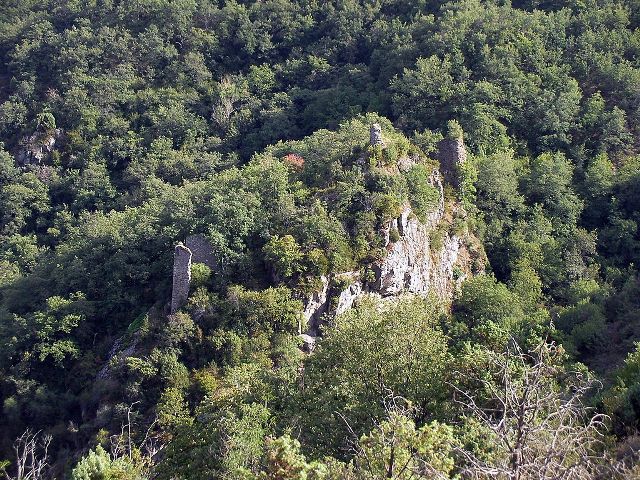 Location: Saint-Romain-de-Lerps, in the Ardèche departement of France (Rhone-Alpes Region).
Built: 16th century.
Condition: Ruins.
Ownership / Access: Privately owned.
ISMH Reference Number: PA00116689
Notes: Château Durtail is a ruined castle located in the commune of Saint-Romain-de-Lerps in the department of Ardeche in France. It possessed an octagonal tower, visible before 1954, which can be seen the base. This stronghold was erected in barony before the sixteenth century and had two churches and a castle. Durtail ruin dates back to the wars of religion. Its jurisdiction extended over the whole town of Cornas, most of Saint-Romain-de-Lerps and several plots of Glun, Châteaubourg and Saint-Péray. During the Third Crusade (1146), the land belonged to Arnaud de Cristo who gave it to the bishop of Valencia, which ceded in 1217 to the Lords of Tournon. It then passed successively from 1667 to Levy-Ventadour, Lamotte-Corin, Bouvier-Montmeyran and Coston. The owners of the castle are not inhabited.

How To Get To Château Durtail (Map):