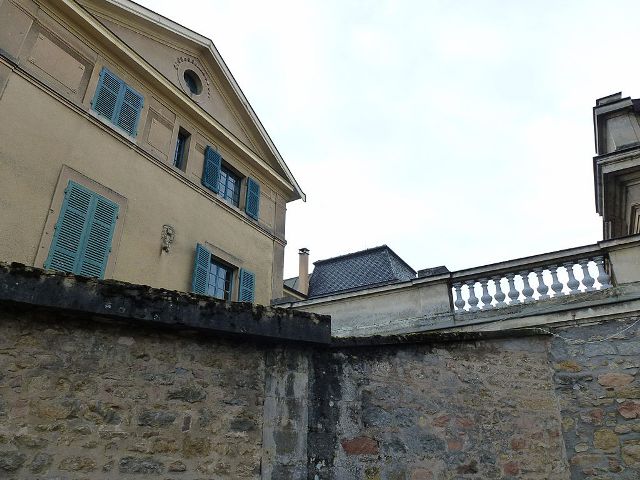 Location: Saint-Didier-au-Mont-d'Or, in the Rhône departement of France (Rhone-Alpes Region).
Built: 17th century.
Condition: In good condition.
Ownership / Access: Private property.
Notes: A secluded behind high walls, Château Mouterde is located in the municipality of Saint-Didier-au-Mont-d'Or in the Rhône department, at an altitude of about 300 meters. It stands on the north side of Rochecardon valley. In the past, he was given other names, such as Montfort, The Fig Tree or The Ronflarde. There are three independent sets of buildings, ie from north to south: a body, rectangular building flanked by two towers, lookouts, with a south-facing main façade; bordering chemin du Petit Bois, a long main building whose main facade looks west; It is flanked to the south wing of defining an irregular quadrilateral; a stepped rectangular main building on three levels and each corner, except the north is one, is flanked by a square tower added in the nineteenth century; leans against a house located two thirds of the north facade; a tower of semi-cylindrical shape separates the southern façade into two parts of three bays each roofs are tiled, except those of the towers of the southern house that are slate. Beyond the terrace, south and west, stretches a vast park in fairly steep slope, crossed by a winding driveway. The laundry of the castle is now part of another property. The castle is privately owned; he did not visit.